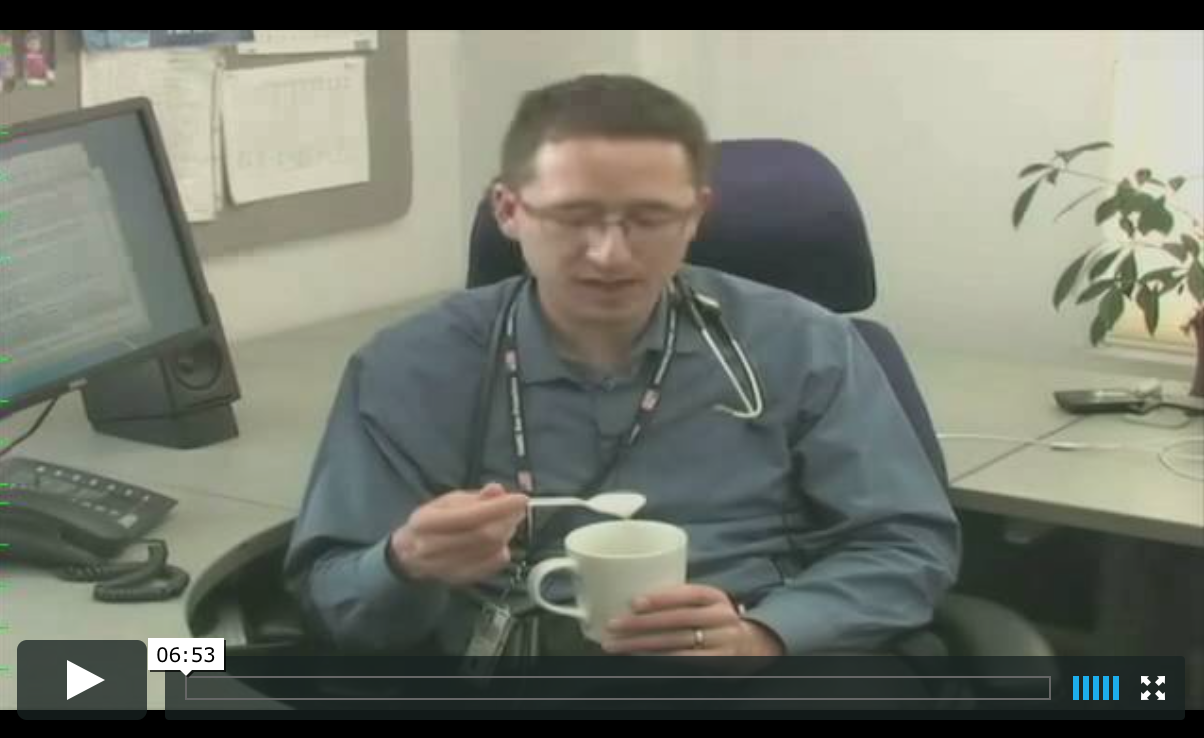 Check it out folks, the #ThickenedLiquidChallenge is now a featured video on MakingSenseofAlzheimers.org, a new site out of U Penn run by Jason Karlawish.  The purpose of the site, as they describe it:

Making sense of Alzheimer’s is a creative space for people to understand the past, present, and future of Alzheimer’s disease.  It is an evolving forum, a gallery of ideas, a museum without walls.

This a brilliant site.  It features personal stories, like that of Dougald MacArthur, a writer, director, and former head of the MFA program in Acting at Temple.  The story is told by his wife Christine MacArthur who marvels at his ability to laugh and enjoy life in spite the Alzheimer’s that generally renders him completely unintelligible.

It features poetry, like Twitch, by Deborah Fries.about the complicated feelings a person might feel upon being asked to donate part of a body, like a brain, for scientific research.

It features thoughtful videos, like the one titled “Should we still read Still Alice?”  In the video, Jason Karlawish likens what Still Alice has done for Alzheimer’s to what Uncle Tom’s Cabin did for Slavery: raising the issue to a level of public consciousness through fiction.  He also describes his complex reaction to the book and film, particularly in light of the protagonist’s young age relative to the overwhelming majority of people living with Alzheimer’s, which may be misleading.

The video for the #thickenedliquidchallenge is centered around the story of Helen, a woman with advanced dementia we cared for here at the San Francisco VA Medical Center (we have permission from Helen’s son and proxy to disseminate this story).

On Making Sense of Alzheimer’s we tell the story of how Helen was prescribed thickened liquids and a pureed diet when she was hospitalized, as she had been for years while being cared for at home.  In fact, she had a big sign on her door that said “Thickened Liquids Only.”  This was right around the time that we started the #thickenedliquidchallenge.  Helen was eating and drinking very little.

Eric Widera was the attending on the palliative care consult team asked to see her.  He happened to be standing next to the sign on her door when the primary team came by, and challenged them to justify the thickened liquids order.  When they couldn’t justify the order, he asked them to remove the thickened liquid restriction.  Lo and behold, she started drinking regular consistency water without coughing or aspirating.  She started eating and drinking more. She perked up.  She was transferred to hospice in our nursing home, with the goal of focusing on comfort, allowing a liberalized diet.

You can see Helen smile in the video after drinking some regular consistency liquids.

My favorite part of the video are the shots from all of the Youtube Videos of people taking the #thickenedliquidchallenge.  Including: The Palliative Care Research Cooperative, Mike Steinman, Suzanne Gordon, Holly Yang, David Oliver, and a host of others I don’t even know.

It’s remarkable to see these videos together in the same place.  The most amazing and humbling thing about the #thickenedliquidchallenge is the way it’s spread organically beyond the GeriPal community.  One of the most rewarding aspects of the challenge has been the way it’s helped people re-think prescribing thickened liquids, and the dialogue it’s started between physicians and speech language pathologists.

Keep on drinking and challenging.