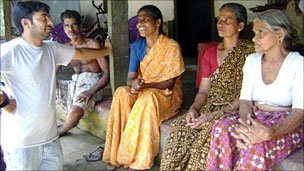 Imagine you have a terminal illness and were given a prognosis of 3 months…or less.

In a developed country like the United States (US), you may have health insurance coverage and adequate financial resources to choose to die comfortably at home, surrounded by family. But if you’re poor and living in a developing country with few social and health care resources, you may not fare as well.

For many elderly suffering from terminal illnesses in India, Where do I go? and Who will take care of me? are questions they face toward the end of life. A recent BBC news article, “Bringing Hope to Elderly and Terminally Ill Indians,” brings to light this reality.

In Delhi, India, Mother Theresa’s Missionaries of Charity runs a shelter where the old and dying can be “abandoned” by family members who are no longer able to care for them.

This post will highlight one particularly unique palliative care program set up in Kerala State, India. Dr. Suresh Kumar, an anesthesiologist, started Pallium India, a palliative care system that focuses on caring for ill individuals at home, since many of them are not well enough to travel.

The program is financially supported through private donations, allowing for services to be provided pro bono.

At Pallium India, as in other palliative care practices, presumably, pain relief is a major concern for many cancer patients and the providers caring for them. Although India is one of the largest producers of opium, the use of legal morphine in the country has seen a substantial reduction following the passage of the Narcotic Drugs and Psychotropic Substances Act in 1985 (as discussed in a 2007 NY Times article).

Although obtaining morphine in India is an arduous process that deters many pharmacists and health care providers alike, Dr. M. R. Rajagopal of Pallium India advocates for the use of the opiate derivative for patients in pain.

Furthermore, Pallium Care is unique in that college students serve as volunteers, and the program’s model is based on providing medical care to the elderly and terminally ill while engaging the community.

Kerala has a high literacy rate and being a smallish state (comprises 3% of Indian population), possesses a strong sense of community that contributes to the success of this palliative care model.

Due to its success in providing care through community participation, Pallium India is expanding globally. The US arm of Pallium India aims to disseminate information about palliative care among Asian-Indian populations in the US, but, I wonder, how sustainable this model would be in places that lack a strong sense of community, say like major urban centers in industrialized nations….