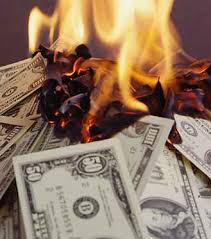 The title of this post may sound a little Tea Partyish, but stick with me here…

Medicare is projected to go broke by 2024.  We need to do something about it.  Here are a couple of news articles this week that identify some low hanging fruit.

1.  Rita Redberg, UCSF cardiologist and editor of the respected Archives of Internal Medicine, had a terrific op-ed piece in the New York Times this week about overtreatment of older adults, paid for by Medicare.  Some highlights (or lowlights)

My favorite quote from Dr. Redberg:

Another factor is the shocking chasm between Medicare coverage and clinical evidence. Our medical culture is such that if the choice is between doing a test and not doing one, it is considered better care to do the test.

2.  Pro-publica has been doing some terrific reporting recently.  I previously postedon their terrific expose of the Heart Rhythm Society’s shameless and absurdly lucrative relationship with the makers of implantable cardiac defibrillators (usually paid for by Medicare, as above).  This week Pro-publica exposeda frankly disgusting relationship between the Society of Hospital Medicine and the drug company Sanofi-Aventis.

This “pay for delay” profits the drug companies at the expense of taxpayers and patients.  It’s yet another example of how drug and device money given to professional societies is tainted.

It’s sick, really.  The Society of Hospital Medicine should issue an apology, and return the money from Sanofi.

And transparency is not enough.  Professional societies should not be allowed to take money from drug and device manufacturers.  Period.  It leads to too much abuse, erosion of public trust, and overtreatment that harms patients, particularly older adults.  And industry profits often come at the expense of Medicare, paid for by you.

Your tax dollars, going to waste.  Tea party, anyone?