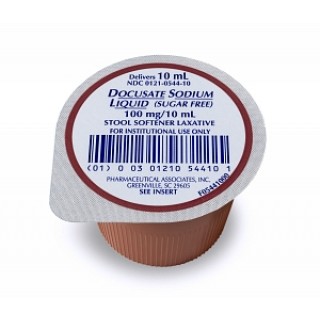 We’ve written about the harms and lack of efficacy of docusate a fair amount on Geripal (here, here, and videos here).   This week in JAMA IM another fantastic research letter came out that should put another nail in docusate’s coffin by focusing on the indirect costs of prescribing this medication.

What did they do in this study?

The authors used pharmacy data for fiscal year 2015 from the McGill University Health Centre in Canada. They compiled doses and drug costs for the medical and surgical units for oral laxatives.   They also estimated that it took 45 seconds of nursing time for each medication administration and used Quebec base salary for university-trained nurses to estimate nursing costs.

Doctors love writing for docusate.   It was the most commonly prescribed laxative, accounting for 64% of all doses of laxatives.   This meant that nurses spent 2,065 hours to administer over 165,000 doses of a docusate, despite a paucity of data to support its use.   The total costs of all this nursing time just to prescribe decussate was estimated to be over 57,000 Canadian dollars.

Furthermore, among those who were discharged from the hospital, half got prescriptions for decussate products.

I’m going to leave it to the authors for the conclusion:

“In our institution more than 250 000 doses of laxatives are administered annually, requiring the equivalent of almost 2 full-time nursing positions to dispense. Sixty-four percent of use involved docusate-based softeners, for which there is little quality evidence supporting efficacy in constipation prevention or treatment….   While seemingly trivial, the routine use of docusate products in a constrained health care system is wasteful.”

We couldn’t agree more.   So much so that we also wrote an accompanying editorial on this study in JAMA IM, summarizing the efficacy, harms, and costs of docusate.