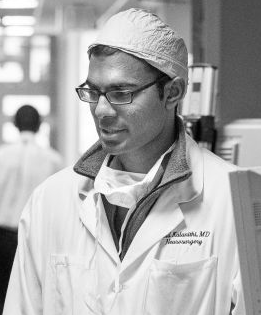 “And with that, the future I had imagined, the one just about to be realized, the culmination of decades of striving, evaporated.”

Nearly twelve months into my residency training, I learned that one of my best friends from medical school died at the age of 28. Through all the grief of losing a close friend, and the sorrow I felt for his family, I couldn’t help shake a nagging question that washed over me in waves, particularly in days where I was overwhelmed or burnt-out as a trainee, and one that I felt guilty even having: “was it worth it?” Was it worth it for him to go through years of exhaustive medical training that consumed the majority of his life, only for it to be taken away so close to the ultimate realization of all of his efforts. In hindsight, it was not really a question I was asking of his life, but of mine.  Was it worth striving so hard through residency knowing that at any time, I may meet the same untimely fate?

Reading through Paul Kalanithi’s new memoir, When Breath Becomes Air, I could not help but think of this question. Kalanithi was in his final year of training as a neurosurgeon, probably one of the most arduous and lengthy career paths one can take in medicine, when he was diagnosed with widely metastatic lung cancer. The book chronicles how his life changed after receiving the diagnosis, one that he knew was terminal despite his oncologists unwavering resistance to give him a prognosis. He writes eloquently about how hope, denial, the prospect of death, and the ever changing perception of time is felt by someone living with a disease that has its ebbs and flows, but ultimately is relentless in its progression.  The book is both incredibly magnificent and tragically sad, but at no point do you ever feel pity, as his strength appears to only grow as his body becomes more frail.

There were several areas in the book where I felt such a strong kinship with Kalanithi, one that will echo with many others who have chosen a career caring for the seriously ill in part to better understand the nature of death and dying. Kalanithi writes about how he started his career “in part, to pursue death: to grasp it, uncloak it, and see it eye-to-eye, unblinking.” Despite though being fully immersed in a life that intertwines life and death, he writes:

“I began to suspect that being so close to the fiery light of such moments only blinded me to their nature, like trying to learn astronomy by staring directly at the sun. I was not yet with patients in their pivotal moments, I was merely at those pivotal moments. I observed a lot of suffering; worse, I became inured in it. Drowning, even in blood, one adapts, learns to float, to swim, even to enjoy life, bonding with nurses, doctors, and others who are clinging to the same raft, caught in the same tide.”

The most poignant part of this book for me was his use of a word that was threaded through the entire memoir: “potential.” Initially this was in description of how his medical training was “relentlessly future-oriented,” one that tirelessly built potential, a potential that he would never be realize after the diagnosis of his cancer. Later in the book, as Kalanithi explores what brings meaning to ones life, he writes about how the act and effort of working towards something, is meaningful in itself:

“Years ago, it had occurred to me that Darwin and Nietzsche agreed on one thing: the defining characteristic of the organism is striving.  Describing life otherwise was like painting a tiger without its strips.”

I am not sure I would have the same unwavering dedication to my professional career as Kalanithi did when he decided to continue with his neurosurgical training after his diagnosis.  With that said, Kalanithi’s book serves as a reminder that striving to bring meaning and purpose to ones life can take many forms.  The challenge is to be “neither blind to, nor bound by, death’s approach.”