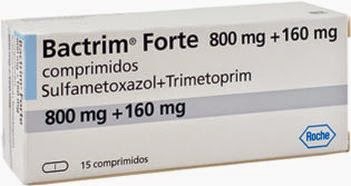 What? It’s already 2015. But, I have so many great articles published in 2014 that I need to post about! Well then, for my next series of posts I’m going to do a quick round-up of articles published last year that we haven’t already talked about on GeriPal.   This first on the list shows an association between sudden death in those who were given trimethoprim-sulfamethoxazole (co-trimoxazole) while already on renin-angiotensin system blockers (i.e. angiotensin converting enzyme inhibitors (ACE-inhibitors) and angiotensin receptor blockers (ARBs).

This was a large nested case-control study published in the BMJ last year.  It included residents of Ontario who were 66 years of age or older and were treated with an ACE-inhibitors or ARBs.   The cases were those who had sudden death and who received an outpatient prescription for either co-trimoxazole, amoxicillin, ciprofloxacin, norfloxacin, or nitrofurantoin within 7 days of death.  Each case was matched with up to four controls on age, sex, presence of kidney disease, and diabetes.

Of the 1,601,542 patients in this cohort treated with either an ACE-inhibitor or ARB, 39,879 died suddenly.  Of these deaths, 1,110 occurred within seven days of a prescription for one of the study antibiotics.

In the primary analysis, trimethoprim/sulfamethoxazole was associated with a significantly increased risk of sudden death compared those who received of amoxicillin (odds ratio 1.38, 95% confidence interval 1.09 to 1.76 after adjustment). Ciprofloxacin also had a smaller but still significant increased risk of sudden death compared to those taking amoxicillin (1.29, CI of 1.03 to 1.62).

Now we don’t really know if there is a causal relationship between use of trimethoprim-sulfamethoxazole and sudden death, and we can only speculate on what may be the reasons behind the association. The authors hypothesize that it is due to trimethoprim’s ability to raise potassium levels. However, we don’t have any data on serum potassium concentrations. There are also limitations to this trial that prevent a definitive answer to what we are supposed to do clinically. For example, the cases and controls were very different (the cases were more likely to have heart failure, renal failure, and all together more co-morbidities). There also may be an issue of confounding by indication, as we don’t have any data on why these individuals were prescribed these antibiotics.

So, what do we do with this information? I’ll be more cautious when prescribing trimethoprim-sulfamethoxazole, especially in those taking ACE-inhibitors and ARBs. In a previous publication by the authors of this study, there was a seven sevenfold increase in the risk of hyperkalemia induced hospital admissions in ACE-inhibitors and ARB users taking trimethoprim-sulfamethoxazole compared with those exposed to other antibiotics. So at a very minimum, I’ll keep a closer eye on those potassium levels.

For a more in-depth discussion on this paper, check out the editorial here or this wonderful post on #NephJC.