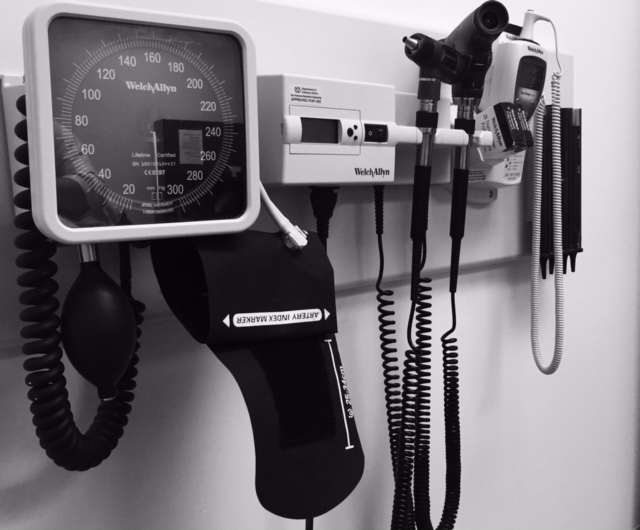 The SPRINT trial came out about 6 months ago– it was supposed to revolutionize the way we thought about treating older adults with hypertension. “But adding *more* medicines goes against everything I believe in!” you say. Those are my feelings too, though it’s important to consider what the evidence actually shows.

Let’s break down the SPRINT trial to examine what they did, what they found, and whether it applies to the geriatric patients we care for.

It depends on who you talk to.

Let’s look at the data we have so far: the Systolic Hypertension in the Elderly Program (SHEP) and the Hypertension in the Very Elderly Trial (HYVET) showed BP less than 150mg is beneficial. Observational studies show the lower you go, down to 115/75, the more you can prevent cardiovascular outcomes…but the observational studies don’t always show the other side: adverse effects. Really lowering blood pressure that low requires lots of medications – a cost in term of possible side effects (falls, orthostatic hypotension) and actual monetary costs.

There is data from randomized controlled trials as well: the Action to Control Cardiovascular Risk in Diabetes (ACCORD) Blood Pressure trial compared intensive blood pressure control with a goal of less than 140 to less than 120; very similar to SPRINT, but in a diabetic population. The ACCORD trial did not demonstrate a clear benefit for treatment to the lower target for on it’s primary composite cardiovascular disease outcome (Hazard Ratio 0.88, 95% CI: 0.73 to 1.06, P =0.20).

As a result, experts -cardiologist, nephrologists, geriatricians- differ on their thoughts on what the best goal blood pressure for older adults is; this study set out to answer that question.


What did the SPRINT trial do?

They excluded those who had diabetes or stroke, those who had low blood pressure (systolic less than 110) after 1 min of standing, and anyone in a nursing home, only community dwelling patients were included in the trial. SPRINT also excluded people who they thought couldn’t adhere to the treatments or attend the necessary study visits.

There were 9,361 participants in the study, and 2,636 of them were >75yrs old! Overall 35% were woman, and the average BMI was 29. The mean baseline blood pressure was 139mmHg, and 90% of patients were on antihypertensive medications to start with.

Can I trust these study results?

This was a well done study. They study was stopped early (after 3.26 years of the planned 5 years). In small trials this can introduce bias or exaggerate the findings, however SPRINT is large with trial with the large number of primary end points (n=564), so results are likely valid. It was open-label, so participants and investigators knew treatment assignment. Non-blinded participants/doctors could perhaps introduce some systematic bias, though hard to see how would influence results either way, and I would not discount study results based on this.

The $1 million dollar question – does this apply to the patients we care for?  Two issues here: the generalizability of the study and adverse events.

I think that if you took one of my geriatric clinic patients who fit the study criteria and study protocol, the study results might apply to them. This might be a 83 yo gentleman with mild CKD and hypertension, relatively healthy and active, able to manage his own meds and come to clinic for regular blood pressure checks.

Blood pressure was measured in this study as the average of 3 measurements over 5 min, taken automatically without a doctor in the room. In a separate article, the SPRINT authors note that the average blood pressure measurement could be much lower than a single blood taken by a doctor wearing white coat. This could lead to overtreatment if the just one blood pressure from clinic was used to adjust medications.

In addition, blood pressure was monitored and meds were adjusted each month – adding *and subtracting * meds to keep at goal. This much more intensive blood pressure management than is typical done in many clinics.

It is also important to remember who was excluded from SPRINT. First, no nursing home patients were included. In addition, wee can’t tell from the baseline characteristics that were reported about the participants’ level of frailty, functional status, gait speed, or ADL dependence. So I would be nervous generalizing to a frail older geriatric population, who might be very different than participants included in this study.

The adverse events are very important to consider in our geriatric patients, especially syncope and hypotension! There was no difference in rates of falls (I am not sure what to make of this- maybe this was captured by syncope?). It is also important to note that randomized controlled trials are not designed to pick up all adverse events well. Even though this was large trial, more side effects could come out in observational studies/ clinical practice, and there could be more frequent adverse events when intensive blood pressure treatment is applied to real life.

This was a VERY well done study. The number needed to treat of 61 over 3 years is impressive. However, in our geriatric population, we have to compare the benefits to harms of syncope, hypotension (and resultant hip fractures?), and potential overtreatment due to white coat HTN. In the geriatric population, it is also important to consider the time to benefit, and incorporate life expectancy, co-morbid conditions, risks of polypharmacy, and patient values and desire to take more medications.

Based on this trial, are you going to target a lower blood pressure for some of your patients? If so, which ones? How would you explain it to them?