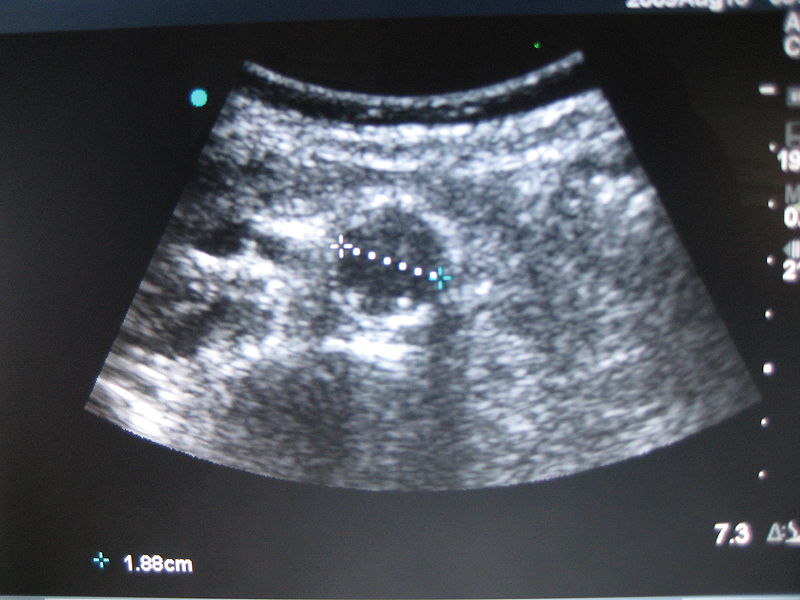 Abdominal Aortic Aneurysms (AAA) pose one of the most interesting and difficult of dilemmas about disease screening. AAAs are dilitations of the aorta that are prone to rupture. AAA ruptures are catastrophic, and usually lethal (about 80% mortality). AAAs are pretty much a Geriatric disease, with almost all ruptures occurring after the age of 65. AAAs are much more common in men than women. (and most ruptures in women occur after the age of 80). There is a very strong association with smoking—those who ever or currently smoked are at least 3 times higher risk than never smokers.

Since repairing a AAA can prevent rupture, on the surface, this seems like a great disease for sceening. The problem is that surgical repair is a major operation, with substantial morbidity. About 5% of patients will not survive surgery. One way to think of this is as follows:

Among patients with AAAs, the patients who will benefit from surgery are those who will eventually have a rupture. However, all patients who will just live with the AAA, and eventually die of something else will be harmed by surgery, and sometimes this harm will be substantial. Obviously, there is no certain way to know in advance which group the patient sitting in front of you will end up in.

In 2002, a large RCT in the UK (Multicentre Aneurysm Screening Study–MASS) was published that supported screening 65-75 year old men for AAA. The investigators recently published the 10 year follow-upof MASS that further clarifies the role of AAA screening. This clever study randomized over 60,000 men 65-75 years old to two groups: One group received an invitation to receive a screening abdominal ultrasound (US). The other group got usual care. 80% of those invited attended the screening. If no AAA was detected, no further intervention was done. If a AAA between 3.0 to 4.4 cm was detected, the US was repeated yearly. If a AAA of 4.5-5.4 cm was detected (either initially, or on follow-up), the US was repeated every 3 months. If a AAA of 5.5 cm or greater was detected, the subject was referred for surgery. About 5% of subjects had a AAA detected on initial screening.

Another way to look at these results: For every 200 patients screened, one AAA death will be prevented, and two additional patients will have AAA surgery.

When we discussed this article at the UCSF Division of Geriatricsjournal club this week, we debated whether this screening program should be routinely adopted in the US. Our group was split (5 in favor, 6 opposed). Those opposed noted that the improvement in AAA mortality might not necessarily translate into a benefit in terms of all cause mortality. They also felt that classifying 30 day post-surgical deaths as AAA deaths did not fully account for the downsides of the extra surgeries. Several noted that it is common for older patients to do poorly after major surgery, and some will have declines in functional status. These quality of life impacts may be substantial, and may causes long term decreases in survival.

Those in favor of screening, felt the survival benefit was substantial, and likely to outweigh the downsides of surgery. Because AAA rupture is so lethal, they felt it was unlikely this degree of AAA mortalty reduction would not translate to an all cause mortality reduction. It was also noted that a study powered to show an effect on all cause mortality would be impossibly large, and that demanding such evidence before we act sets the evidence bar unreasonably high.

Of note, in part based on the earlier results from MASS, the US Preventive Disease Task Force does recommend a one time screening ultrasound in men age 65-75 years who are current or past smokers. This is similar to the MASS protocol, except that the roughly 30% of men who never smoked would not be screened. The guideline and evidence reportcan be found on the Annals of Internal Medicine website.