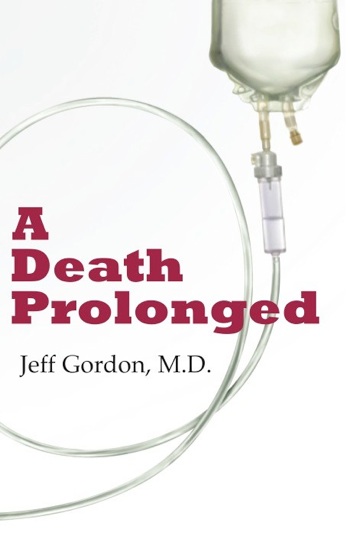 Many terminal patients linger through their final months with a miserable quality of life and too often with extreme levels of suffering. Today’s high-tech medical care can sustain technical life – the beating heart – but utterly fails to restore real quality of life for many. The result: Death Prolonged.

This is the introduction from Dr. Jeff Gordon’s new book, A Death Prolonged.  Dr. Gordon’s agenda is pretty clear in this book – to get people to talk about end-of-life prefereneces. He uses a fictional account of a young physician who learns that high cost end-of-life care may not be synonymous with high quality care.  She also learns that in a system with limited resoureces, high cost interventions in terminally ill patients are likely to shift resources away from cheaper preventive care.

After reading this book I thought it would be a good idea to ask Dr. Gordon a couple questions about how he decided to approach this subject in his novel.  Here are four of the answers he gave me:

Q. What motivated you to write this book?

A. As a hopitalist, I witness two related tragedies every day: people suffer needlessly at the end of their lives and we waste precious health care dollars on futile care. Unfortunately, the problem is growing, as America ages. We could prevent both tragedies if physicians and patients would discuss matters in advance. People need the truth about EOL care because most are misinformed. That’s because most people get their information from television, and the TV fantasy world has created a level of ignorance that is hard to exaggerate. The dollar and human costs of this gross misinformation are astronomical. This book brings the public into the hospital to learn the facts and empower them to make informed decisions about EOL care. In the end, I hope they will have intelligent and productive discussions with their family and physicians.

Q. One lesson I learned during this last summer’s healthcare reform debate is that one should be very careful mentioning improving end-of-life care anywhere near the words cost savings, otherwise it will be labeled as rationing or worse, “pulling the plug on granny”. Your books central premise is that simple interventions, like advance directive discussions, have the potential to both save money and relieve suffering. Are you concerned that you are too closely connecting these issues?

A. My greater concern is that we will try to sugar-coat the truth. Most Americans don’t make informed end-of-life decisions and end up receiving care that prolongs their suffering and consumes valuable resources. We must assert this truth frequently and to many audiences. I found that the “death panel” talks from last summer opened doors for meaningful discussions and allowed me to enlighten more people with the facts. We should attack ignorance with facts and thoughtful dialogue. “Spin doctors” underestimate the intellect of the American people. Let’s just tell the truth in a clear, sensitive, and unapologetic way, and frame end-of-life discussion in terms of informed consent: the risks, benefits, and alternatives. “Facts are stubborn things; and whatever may be our wishes, our inclinations, or the dictates of our passion, they cannot alter the state of facts and evidence. John Adams”

Q. You use a fictional story to lay out your arguments against costly care that only prolongs dying and suffering in terminally ill patients. Why not just describe real events that you have seen in the hospital?

A.  Fiction is powerful and has been extremely influential in many social and ideological struggles. George Orwell’s 1984 and Animal Farm shaped American understanding of communism. Ayn Rand effectively conveyed her influential existentialist views through Atlas Shrugged and The Fountainhead. When Abraham Lincoln met Harriet Beecher Stowe, author of Uncle Tom’s Cabin, he said, “So you’re the little woman who started this great war.” We need to attack EOL issues from every possible angle and some people will embrace and feel the truth through fiction, like this, in ways that they can’t through non-fiction.

Q. You recommend several ways to improve documentation for end-of-life decisions by patients and families? One notable exception is the Physician Orders for Life-Sustaining Treatment (POLST) Paradigm program. What role do you think POLST forms have in improving end-of-life care?

A. Unfortunately, we do not use POLST forms in Ohio. The forms are simple, unlike the DNR forms we use. With POLST, patients can make their wishes explicit and clear. I wish I’d included a discussion on the POLST paradigm in the book.