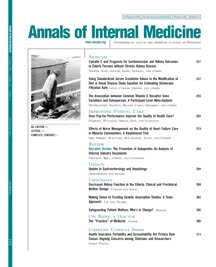 Medicare recently started publicly reporting hospital readmission rates as a measure of quality, and there are proposals to financially penalize hospitals with high rates of readmission. A recent article in the Annals of Internal Medicine makes a compelling case that an unintended consequence of such a proposal could be to worsen health inequalities by inappropriately penalizing hospitals that care for our most vulnerable underserved patients. I found the article convincing. I don’t think Medicare should implement any plans to penalize hospitals based on readmission rates without answering the concerns of this article. Further, the article raises serious questions about viewing readmission rates as a measure of quality. The authors of the article were Drs. Rohit Bhallaand Gary Kalkutof Montefiore Medical Center in the Bronx, NY and the Albert Einstein College of Medicine.

It is certainly true that encouraging hospitals to reduce readmission rates in older patients is a good thing. There is a strong basis for viewing readmission rates in the elderly as a measure of quality. While Medicare may be primarily concerned with the cost of rehospitalization, it is also the case that repeated hospitalizations in older persons can have very deletious complications, including exacerbating disability and accelerating cognitive decline. The need for readmission can be an indicator that coordination of care was poor.

However, there are many things beyond the hospitals control that may impact rates of readmission. Independent of the quality of care, patients in poor communities are probably at higher risk of readmission. Factors that contribute to this include lower levels of social support, less access to outpatient care, and lower education. While Medicare readmission models adjust for disease diagnoses, they don’t currently adjust for any of these other factors that may also be important determinants of readmission. Therefore, comparing readmission rates may unjustly make hospitals caring for vulnerable patients look bad. It would certainly be even more unjust if our safety net hospitals suffer inappropriate financial penalties for readmissions related soley to their higher risk populations.

In addition to these concerns that were raised in the article, it should also be noted that readmission models do not adjust for factors like frailty, disabilty, and cogntive impairment. As a result, hospitals that care for large numbers of frail elders are also at risk of being unjustly labelled as having worse quality based on readmission rates.

Hopefully, Medicare will take the issues raised by Bhalla and Kalkut seriously.