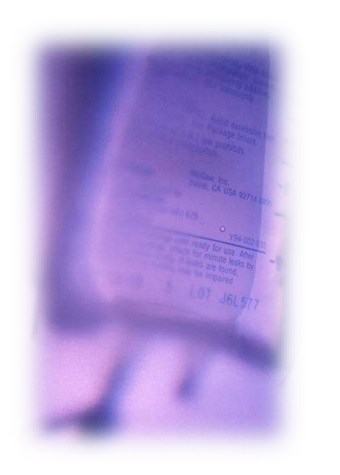 It is better to die dry than wet. At least that is the gist of traditional thinking in hospice and palliative care, where parenteral (IV or subcutaneous) fluids are often avoided at the very end of life to prevent fluid buildup in the lungs and other organs.

The problem is that delirium often complicates end of life care as well. It is one of the four most common emergency calls for individuals receiving palliative care in the home and a common reason for admissions into inpatient hospice units. Reduced oral intake, a part of the natural dying process, may result in dehydration in some but not all individuals at the end of life, and may be a factor in the development delirium. Studies in the geriatric literature suggest that early recognition of dehydration and volume repletion is an important component of delirium prevention.

So, how do we reconcile our desire to avoid the unintended consequences of IV hydration in those at the end of life with that of treating dehydration to prevent delirium?  Some argue for a greater use of parenteral fluids in these patients to improve quality of life, at the very least for those with some evidence of dehydration.  However, the question remains, does IV hydration improve quality of life and decrease incidence of delirium, or will it just worsen symptoms at the end of life?

Dr. Eduardo Bruera and colleagues from MD Anderson add some evidence to how best to manage fluids at the end of life thanks to a study recently published in the Journal of Clinical Oncology. The authors randomized 129 individuals with advanced cancer from 6 hospices to either parenteral subcutaneous hydration of 1 L per day of normal saline or placebo.  In order to maintain blinding for both patients and staff, the placebo was a 100ml a day of saline injected over a similar 4 hour period per day as the fluids in the intervention group.

Inclusion criteria included advanced cancer, reduced oral intake of fluids with evidence of mild or moderate dehydration, at least mild symptoms of fatigue, hallucinations, sedation, and myoclonus, a life expectancy of less than 1 week, , and a Memorial Delirium Assessment Scale (MDAS) score less than 13 (i.e not severe delirium). Those with severe dehydration were excluded as were individuals with renal failure, congestive heart failure, or a history or clinical evidence of bleeding disorders.

The primary outcome was change from baseline to day 4 for the sum of four dehydration symptoms (fatigue, myoclonus, sedation and hallucinations). They also included a rather complete amount of secondary outcomes including:

In the intention-to-treat analysis, there were no statistically significant differences between the IV hydration group and the placebo group at either 4 days or 7 days in regards to:

The authors did find some differences in some measures such as night-time delirium scores, which was worse in the placebo group. However, given the numerous secondary outcomes (47 of them), I wouldn’t place much weight on this, as by pure chance at least two of these outcomes will be positive using a P of 0.05.

One big limitation of the study was that it was underpowered. The planned sample size was 150 patients, but funding issues required termination of the study after 129 patients. This was likely due to the strict inclusion and exclusion criteria. So, you can argue that the authors didn’t find a difference because they didn’t enroll enough patients (a Type II error). This may be a classic Type II error where no significant difference between groups are reported when in fact such a difference exists.  I would be surprised though if the authors enrolled another 21 patients that a clinically significant result would have materialized for the primary outcome since it didn’t look like a trend was developing (-3.3 vs -2.8, P=0.77).

So in the end, we have some data to suggest that IV hydration of 1 liter is unlikely to provide a meaningful benefit to most hospice patients with advanced cancer with mild to moderate dehydration (but not severe).