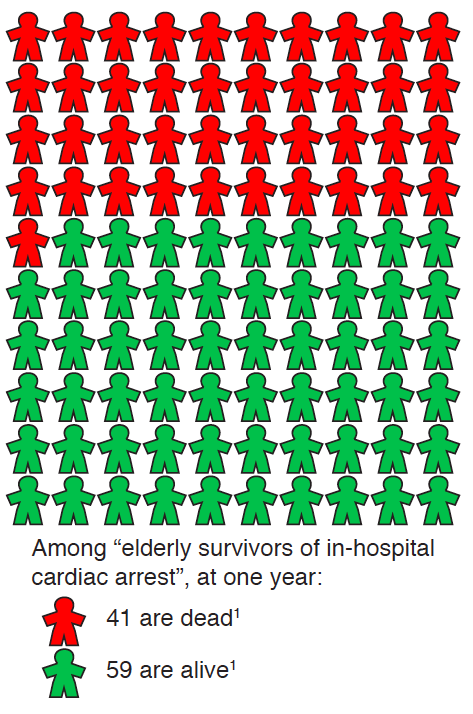 Back in March, the New England Journal of Medicine (NEJM) published a study of long-term outcomes among survivors of in-hospital cardiac arrest by Chan and colleagues. The authors of this study looked at 6972 adults, aged 65 years or older, who were discharged after surviving an in-hospital cardiac arrest between 2000 and 2008. What they found in their study made headlines in the press:

“Among elderly survivors of in-hospital cardiac arrest, nearly 60% were alive at 1 year”

The authors of this studysuggested in their discussion that there is currently a “nihilistic” attitude toward resuscitation efforts, “especially for older patients”. They go on to say the following of the adults older than 85 years of age:

“Although in-hospital resuscitation efforts in patients of advanced age may be perceived as futile, the relatively high survival rate among these patients suggests that discussions about advance directives should be individualized and informed by patients’ preferences and health status.”

While I agree that these discussions should be individualized, I’m a little unclear what numbers the authors are looking at in this article that would possibly give the impression of a relatively high survival among these patients. Indeed this would be seriously misleading statement if said this way to patients when having “discussions about advance directives“. The good news is that I’m not alone in my objections.

Some very smart individuals took the authors of this article to task over the rosy picture they were presenting on the outcomes of CPR. In two separate letters to the editors, Bradford Glavan & William Ehlenbach, and Yee & Newman argue that the presentation of overall survival estimates on the basis of survival to hospital discharge was misleading (see here). Dr. Newman also was kind enough to send me some pictures to back up this argument.

Let’s start off with how one would discuss survival in the way it was framed by the NEJM paper:

As you can see from the above graphical representation from Dr. Newman, 59 out of 100 elderly who survive until discharge after an in-hospital cardiac arrest are alive at one year. However, this picture only tells a part of the story. The full story is best viewed in the light of previous studies looking at the outcomes of CPR in the elderly (see these previous GeriPal posts) as represented by the following chart: 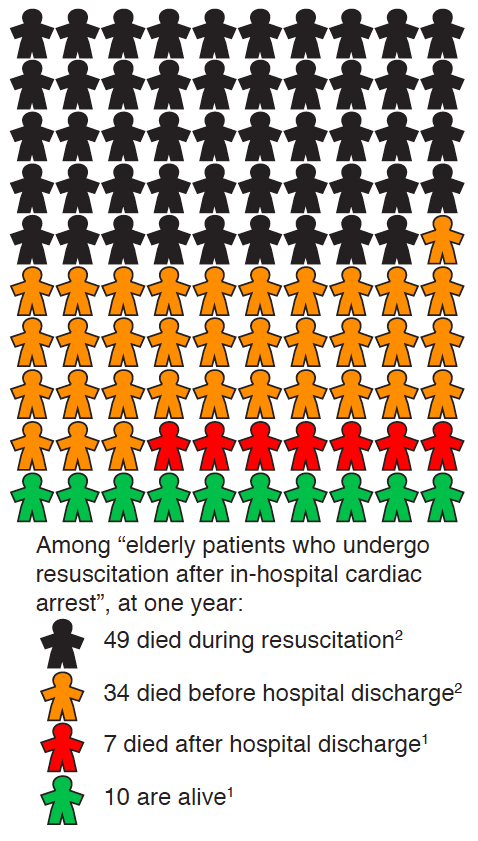 Anyone still left with a view that there is a “relatively high survival rate” for this population? If so, then just look at the data for survival to hospital discharge with good neurologic function or minimal deficits based on study results from an article in this week in JAMA Internal Medicine. 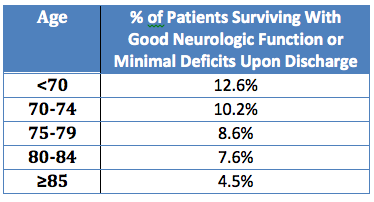 So in the end, while I agree that decisions need to be individualized, I strongly disagree that there is any data to suggest a high survival rate. Drs Yee and Newman do a much better job in my view of how to best summarize the study by Chan et al: