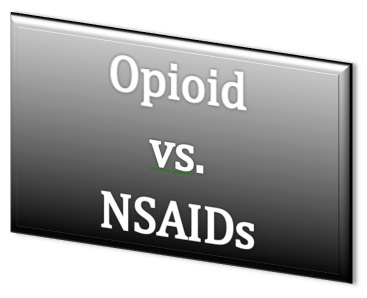 Current guidelines from the American Geriatrics Society (AGS) state that “NSAIDs and COX-2 selective inhibitors may be considered rarely, and with extreme caution, in highly selected individuals” for the treatment of chronic pain. This was largely due to their risky side effect profile that includes worsening hypertension, edema, heart failure, and renal failure. The guidelines also state that “all patients with moderate-severe pain, pain-related functional impairment or diminished quality of life due to pain should be considered for opioid therapy”.  But what about the risks of using opioids? Are they truly any safer than NSAIDs?

The population of the study consisted of medicare beneficiaries with arthritis who were enrolled in two statewide drug benefit programs, and who initiated monotherapy with a NSAID or an opioid between 1999 and 2006. The drug benefit programs gave the authors pharmacy data including information on all prescriptions, dosages, days supply, and quantity dispensed for each medication and the date dispensed. In total, the authors analyzed 12,436 opioid initiators and 4,874 NSAIDs initiators. These patients were mostly female (85%), and most had osteoarthritis.

The authors defined “initiating” opioids or NSAIDs as filling an opioid or NSAID prescription without having filled one in the preceding 180 days. They excluded those patients who were taking more than one analgesic agent or taking combination agents (an opioid and NSAID together), as well as patients with cancer, or those admitted to a nursing home or hospice. They also only included those taking the four oral opioids prescribed most commonly to the cohort (hydrocodone, oxycodone, propoxyphene, and codeine), transdermal fentanyl, and the 10 single-agent oral NSAIDs most commonly prescribed to the cohort. Subjects contributed information from the date of initiation until they experienced a fracture, died, became ineligible for the pharmaceutical assistance programs, or stopped taking the analgesic.

Problem One:  one issue in generalizing these finding to a wider audience is that the most common opioid initiated in the study was propoxyphene (5,552 individuals), followed by hydrocodone (3,805), oxycodone (2,476), codeine (371), and fentanyl (232).  What??? Who in the world still prescribes propoxyphene? Apparently enough physicians to get 45% of this sample on this dangerous drug. Propoxyphene is a very bad actor as it is metabolized to a toxic compound – norpropoxyphene.  It can cause seizures and cardiotoxicity. The FDA also has recently removed propoxyphene from the market. It does make you think that this study is more a study of poor opioid selection considering 45% of patients in this study were taking this drug.

Problem Two: the patient population was just very different between opioid initiators and NSAID initiators. Opioid initiators were more likely to be taking benzodiazepines, antidepressants, PPIs, steroids, thiazides, and osteoporosis medications. They were more likely to have fallen in the last year, and to have taken more medications, made more outpatient visits, more frequently hospitalized, more likely to have renal impairment, and had higher comorbidity scores. The authors adjusted for many of the big confounders (see table), but it does make you think what else was different about these populations that may have made the NSAID group look better. For instance, level of pain and functional impairment were both not accounted for as confounders.  It’s hard for me to justify any conclusion about risks of fractures in this group without adjusting for baseline functional status.

Problem Three: To assess for the possible effects of opioid dose and to control for dose in analyses, all opioid use was converted to milligram equivalents of codeine. The distribution of doses was divided into three groups (0–75, 76–225, and > 225mg equivalents of codeine per day) based on the initial prescription. I guess I’m confused on who would start an elderly patient who has not taken any opioids in the last 6 months on > 225mg of oral codeine equivalents a day (that’s greater than 37mg of oral morphine a day)? Is the problem here an issue with study design, or more that when physicians don’t know how to dose opioids, patients are likely to fall and fracture?

Will this study change my practice?  It does give me some pause when prescribing opioids in the elderly. There is a very plausible link to falls and fractures, and we should all be more careful in the elderly.  This study also underscores the education needed in the community on safe prescribing of opioids given that nearly half of the patients on opioids were taking propoxyphene.  This study though should not be taken as an endorsement for NSAIDs. The numerous other adverse drug reactions of NSAIDs are not evaluated in this study and should not be under-emphasized.

Let’s here from you.  Will it change your practice?  Comment below at Geripal.