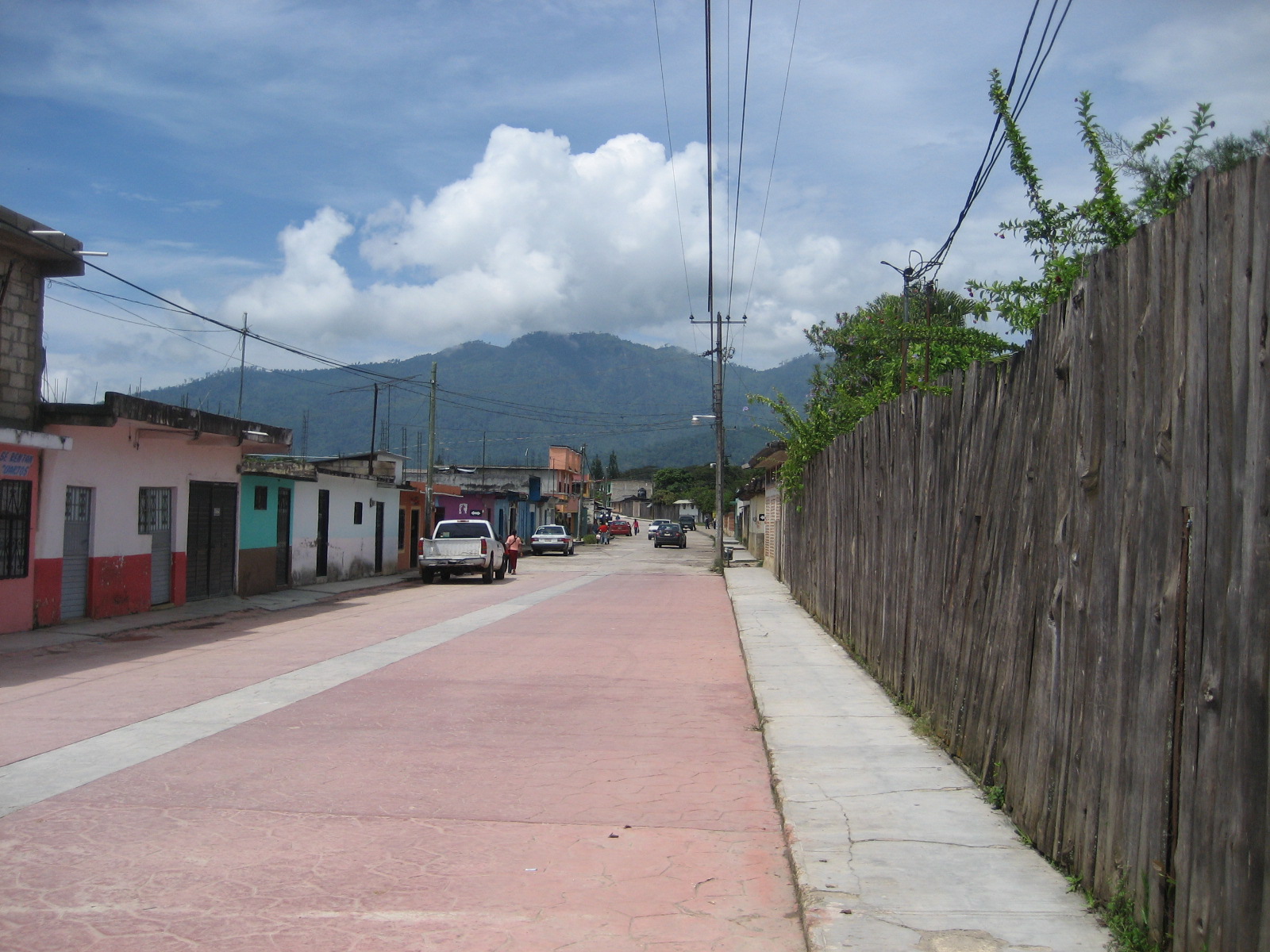 I arrived in Chiapas, Mexico, one of the most southern states in Mexico three days ago. Known as one of the most indigenously and linguistically diverse states in Mexico, it is also one of the poorest. Chiapas is also well-known for being at the center of the Zapatista uprising during the 1990s with the hope of urging the Mexican government to grant land rights and improve living conditions for the poor in Mexico. Today, many of the communities in Chiapas maintain their independence and continue to declare sovereignty and freedom from governance by whom they consider to be their oppressors.

I came to Chiapas to work in a small rural hospital run by nuns from the St. Vincent de Paul Society. Before coming here, I did not know whether my skills as an Internist and Geriatrician would be of use. Certainly, the median age tends to be low in many parts of the developing world, including in Latin America. Yet, the demographic transition is continuing to occur all over the world. According to the World Health Organization, the concern is that “developing countries will become old before they become rich while industrialized countries became rich before they were growing old.” In addition, the UN reports that 59% of people over the age of 65 now live in the developing world, and the UN anticipates that by 2020 there will be 698 million elderly people, as this population will nearly double from 1965 and 2020.

In this hospital, I can see the demographic shift before my very eyes. The elderly are by no means the majority, but they comprise a fair number of the admissions to our inpatient units. On my first day of the internal medicine wards, I was pleased to have 2 patients approximately in their 80s, and 5 patients in their 60s. In these communities, determining age proves to be somewhat difficult and often ends up as an estimate given that many do not have birth certificates. Similarly, keeping track of the passage of time is not as crucial for patients; this in turn, makes history taking and age determination difficult. Even without exact ages, many patients appear much older than what their true chronological age would suggest.

I was not sure what sorts of illnesses I would encounter knowing that much of Mexico still struggles with controlling endemic infectious diseases. To my surprise, the majority of the 60+ year old patients were admitted for uncontrolled diabetes and their associated infections. But a few patients have had some unusual presentations, unusual differentials, and ultimately complex management decisions given our low resource setting.

Many of the 60+ and 80+ year olds were admitted with urinary retention and associated urosepsis, and sometimes fecal impaction. Alas, diagnoses I am all too familiar with! Urinary retention in women is surprisingly common. Though I have not been able to find review articles on this phenomenon, after a discussion with local physicians, it seems that the most likely etiology is anatomical given the high birth rates and associated birth traumas that may leave women with urethral strictures and cystoceles. However, the difficulty in treating these conditions here lies in having virtually no surgical subspecialties, being unable to diagnose exact causative organisms given inability to culture, and similarly, being unable to diagnose and treat electrolyte disturbances given no lab equipment for full chemistry panels. Yet remarkably, sometimes time gives us the answer, and delirium prevention and management can be done without fancy tests and equipment. In fact, maybe it is better that there are no bed rails or restraints available!

Two days ago, we admitted a woman with such profound sepsis that she began to show neurologic changes which made us worry about hypoactive delirium +/- a new cerebrovascular event. She was barely responsive and seemed to show signs of lateralizing as she wouldn’t move one side. Given her age, but being unable to scan her head, we wondered if she had an old stroke whose deficits were becoming apparent, or whether she was having a concurrent new cerebrovascular event. The only somewhat objective data we had was that she had had some GI symptoms approximately in the last week, and our lab results showed a leukocytosis and positive urinalysis. Antiobiotics and fluids were initiated, and a few hours later, she began to wake up and show signs of hyperactive delirium. But the next morning, she looked 100 times better. She was eating, starting to sit up, and starting to talk with her family. The answer? Her family had very kindly saved us what she vomited over night: two 10 cm ascaris worms. This is definitely my first time documenting ascaris as a precipitant of delirium, but I have certainly learned that in the elderly, any infection or change in baseline health status can cause delirium.

Another patient whom I came to know, but who was admitted prior to my arrival presented with signs of stroke (unclear if hemorrhagic or embolic) which resulted in dysarthria and urinary retention but minimal other deficits. Amazingly, this woman also has a long history of being blind, yet has been able to maintain her independence in her ADLs while living at her home with her family. We have no resources here for speech therapy, low vision therapy, or additional rehabilitation. But what we could do for her were simple interventions which were similar to would be done in resource-rich settings. During the days that she remained in the hospital, I worked with her family to ambulate her several times daily to prevent any further functional decline. The biggest obstacle to discharge was her new urinary retention. Given the difficulty of having access to clean water and supplies, I worried about sending her home with an indwelling foley, noting that she would likely return with urosepsis. She had had a foley catheter for a week and every time it was removed, she retained urine. What we did was simple…we put her on a bowel regimen recognizing that constipation was contributing. We worked on timed voiding trials and used only straight cath when she was unable to void. One day later, she voided spontaneously. She was able to go home with her family and with instructions to continue timed voiding.

Though it seems that being in a low resource setting limits what we are diagnostically and therapeutically able to do, in many ways, these limits prove to be beneficial, if not favorable to a frail elderly population. When it was suggested that our frail 78 yo woman with chronic diarrhea, urine infection and cachexia undergo a colonoscopy for work up of chronic diarrhea, I was greatly relieved that this service is hard to come by and requires referral and approximately 200 dollars—something difficult for many patients. Similarly, I have been thankful that all of my patients have been on few or no medications—thereby limiting the risks of polypharmacy. When patients are clearly dying, this process is allowed to happen naturally, rather than artificially extending lives or offering treatments that likely will not be life saving.

There’s a limit to what we do, and this is something I witnessed when a 64 yo woman was brought in virtually pulseless. We made attempts at treating reversible conditions by using antibiotics and briefly using medications that are considered resuscitative. But when it became clear that she was not responding, we allowed her to die and did not prolong her death.

At this hospital, patients and their families do not pay if the death happens in the hospital. In general, if it is clear that a patient is dying, or if there are truly no curative treatments, patients are rarely admitted to the hospital. Mostly, they are encouraged to die at home with family. In general, this seems like a reasonable idea—to die at home with family rather than in the hospital. But I wonder if this in part driven by the fact that patients will not pay for the hospitalization if they die there, or if it is also due to a different conceptual framework. I consider a part of my work as a physician to offer cures when I can, and to extend life when patients believe there is still “quality of life.” But just as importantly I know that I will also help alleviate suffering at the end of life. This is why it is hard for me to hear physicians tell patients and their families: “there is nothing we can do.” This in fact, is never true. There is always something we can do to alleviate pain and suffering even when we cannot cure diseases. I do not want to change the practice of dying at home which seems to be prevalent and accepted here. However, I do hope that we can be comfortable in our role as healers, and help patients and families accept the dying process when we reach a point where we cannot offer curative treatments. While we are limited in our access to opioids and other controlled substances, we can still offer support to families, and some relief of symptoms for patients.

After a week of working here in Chiapas, I am not sure which health care system I prefer as there are benefits and gross deficits in both the United States and here in this rural part of Mexico. The system in the United States in many ways is inequitable as not everyone has access to the same level of care, but there are usually more treatment options if one desires. This seems ideal for individuals with good functional status who want a chance of improvement or a chance at receiving evidence-supported therapies. But here in Mexico, care may be just as inequitable as in the United States. Because of limited resources, some therapies may need to be rationed. But this has all made me wonder if it is better to get older in a setting with fewer resources, where one will not have the opportunity to have too many interventions, or too many medications. Instead, aging may become an accepted and natural part of life. Similarly, within reason, the comorbidities associated with aging are not constantly battled, and death is considered another stage of life.