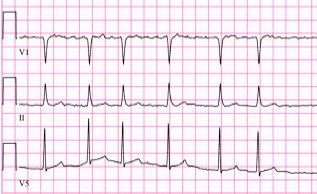 The good news is that there is a treatment that has been available for many years that dramatically reduces the risk of stroke in patients with atrial fibrillation. Warfarin, an anticoagulant or blood thinner, is very effective at stroke reduction. However, warfarin can be hard to use. If too much is given, the risk of bleeding complications becomes high. If too little is given, it becomes ineffective at preventing stroke. Some studies have suggested that when warfarin is properaly dosed, almost all of the excess stroke risk of atrial fibrillation goes away with only a modestly increased risk of bleeding. Unfortunately, in many patients, it is hard to continuously properaly dose warfarin.

Because of concerns about the risk for bleeding, and difficulties with the required monitoring, many patients with atrial fibrillation are not treated with warfarin. The oldest patients are less likely to be treated with warfarin as problems such as frailty and falls increase concerns about bleeding and adherance to the required monitoring becomes more difficult.

Many of the oldest old are treated with aspirin instread of warfarin. Aspirin does somewhat reduce stroke risk, but not nearly as much as warfarin. Old age alone should never be viewed as a contraindication for warfarin. Many patients in their 90’s are safely managed with warfarin.

None the less, there is a need for better treatments for patients who can not tolerate warfarin. A recent article in the New England Journal of Medicine provides impressive evidence that a new agent, Apixiban, may be that treatment.

This study enrolled 5599 persons with atrial fibrillation in whom it was felt warfarin was unsuitable. The most common reason was a belief that the patient could not comply with the monitoring. Patients were randomized to either aspirin or apixaban. The study was stopped early because apixaban was much more effective. In particular:

The study provides strong evidence that Apixaban provides substantial benefit in terms of stroke reduction over aspirin with a reasonable safety profile. It seems likely most patients who can not tolerate Warfarin will be good candidates for Apixaban as a superior alternative to aspirin. An important caution though: Warfarin is still the treatment of choice—Apixaban should only be used in patients who absolutely can not tolerate warfarin.

So, this study does seem like a big advance. But there is one big problem, a problem pervasive in clinical research. The clinical question in this study–revolving around alternatives in patients with atrial fibrillation who can not tolerate warfarin is overwhelmingly a problem of the oldest old. The patients for whom Apixaban would be most useful include

Despite many excellent features of this study, it fell unacceptably short in terms of selecting a patient population that helps us understand the role of Apixabab in the very patients who are the most likely candidates for this therapy.

The average age of enrollment of 70 is unacceptably low—and far lower than the age of a patient who is a typical candidate for this therapy. It appears there were very few patients in their 90’s, even though atrial fibrillation is exceptionally common in this age range and their is an urgent need for warfarin alternatives in this population. It is not clear if any of the patients were in long term care.

Further, the study fails to report on essential clinical meaures such as need for assistance with basic and instrumental activities of daily living, falls history, cognitive function, or social support. Describing a study of a Geriatric problem without these measures is like conducting a study of heart failure and not measuring ejection fraction. Not only are these essential measures for describing the subjects and understanding generalizability, but they were essential candidates for subgroup analysis as they could have influenced the effectiveness of treatment

While the investigators have made an important contribution, it is unfortunate that for what is essentially a Geriatric problem, the study was not designed in such a way to make it most relevent to the Geriatric population.

Unfortunately, this problem is the norm in clinical research. And arguably, by at least hitting a mean age of 70, the investigators have performed above the norm. However, the norm is completely unacceptable.
It is time the public, advocates for older persons, the NIH, and the FDA start to demand better.