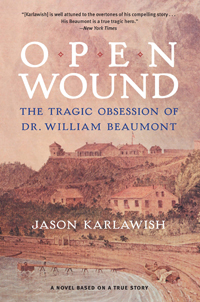 I wanted to alert the
Geripal community about a wonderful and interesting book written by one of our
colleagues: Open Wound, The Tragic Obsession of William Beaumont by
Jason Karlawish form the University of Pennsylvania.

Most people will enjoy
the historical fiction (based solidly on actual events) following a young
physician (Beaumont) who saves the life of a French fur trapper (Alexis) in a
northern Michigan military outpost in 1822. Alexis suffered a gunshot wound and
was going to die until Beaumont intervened and treated his wound.
Unfortunately, he was left with a fistula, a hole leading directly into his
stomach. This hole provided a window into the world of digestion and over the
course of the next several years, Beaumont performed numerous experiments on
the gastric juice that he collected. These experiments largely proved that
digestion is a chemical process rather than a mechanical one.

I’m not necessarily a
history buff, and I might have missed this book if it had not been a friend and
colleague who had written it. However, I’m so glad I did.

For me, the book was
personal. As a medical researcher, the amount that I identified with Beaumont
was frightening. I identified with the endless hours of work, the travel, the
unresponsive government funder, the criticism from fellow researchers, the
constant self-criticism, the exasperated spouse, the children wanting to see
more of me, the difficulty in finding happiness, the ambition…

Indeed, the ambition is
what caused the most introspection for me. While it is quite clear that
Beaumont’s intentions at the beginning of the book were to help a patient and
to advance science, those intentions became quite muddy over the years. It made
me think about my research and my patients. I often have the experience where a
patient I am seeing might also be eligible for a study that I’m conducting.
When that is the case, I generally ask that patient if they wish to be in the
study. All of the work that I do is approved by our research ethics review
board and most of the studies I do don’t involve invasive interventions or long
time commitments. I always stress the voluntary nature of my request as well as
my fidelity to our relationship. I haven’t been too concerned with people feeling
coerced by direct recruitment.

Like Alexis to Beaumont
though, I wonder how easy it is for my patients to say no to such a request.
While my clinical relationship is supposed to protect the patient, how will I
know when my ambition to complete a study gets in the way of protecting a
patient for whom a research study isn’t the best idea? Ambition causing
unethical research was recently highlighted by two UC Davis neurosurgeons who experimentedon injecting gastrointestinal bacteria into humans with brain tumors – an
experiment that was apparently meant to be done only on rats.

I strongly recommend
this book to potential researchers and potential research subjects – that’s
basically everyone. One reason we learn about history is so that we can avoid
repeating it. Like all good histories, this is indeed the value of Dr. Open
Wound. Nice work Jason – I look forward to your next book!