This Veterans’ Day, stop and think about the World War II Veteran. The average veteran of WWII is now over 85 years old.  Currently 500 WWII veterans die every day. The “Greatest Generation” is in need of geriatric palliative care.

The next WWII veteran that you care for, ask them if they have been on an Honor Flight. If you have not heard about Honor Flights, read more about this amazing program here.  I once had the pleasure to see an Honor Flight arrive to Reagan National Airport (DCA) and the entire airport stood in applause.  It was truly moving as the leader of the group asked the terminal to cheer for these heroes.

The Honor Flight takes veterans and flies them (with medical volunteer support) to DC to see the WWII memorial on the mall (the program has expanded to Korean and Vietnam Wars’ veterans as well.)  The WW II memorial was not completed until 2004, and by the time it was finally dedicated, many veterans who had waited for decades hoping to travel to the monument were too sick to make a long drive.  Earl Morse, a physician assistant and retired Captain and pilot with a group of 12 other pilots flew a group of veterans to DC, and in 2005 the Honor Flight was born. By 2012 the program had transported over 98,500 veterans to DC and the program has 127 hubs in 41 states and 20,000 veterans flew in 2015. Flights are accompanied by medical personal and assistants and other volunteers and no veteran is ever charged for the experience.

I can testify to just how important the Honor Flight can be.  So many WWII veterans returned home after the war and never discussed the difficulties they experienced. Many families decribe how “Dad was different after returning from the Honor Flight, as if a weight was lifted from his chest.” One patient had been so looking forward to the flight which was the last thing on his “bucket list.”  He died within days of his return, happy. The advice of one veteran to another was “Don’t wait, go as quickly as you can.”

But what do you do for the frail aging veteran for whom even an air trip would be too hard?  This is where the promise of technology can really make a difference. Honor Everywhere uses virtual reality technology to bring the frail veteran on a virtual trip to DC.  Instead of attempting a long arduous journey, the Honor Flight experience is brought to the veteran in his or her own home, or assisted living or nursing home. The veteran  is (virtually) greeted by cheering crowds at the airport as the Honor Flight arrives to DC, and then experiences a trip to the Iwo Jima Memorial, Arlington National Cemetery, and finally the World War II Monument. Watch the video. The veteran can feel like he has traveled, without ever leaving home or the bed.

If you care for terminally ill veterans, ask them if the Honor Flight would be important for them.  If it is and they are too frail to go, think about setting up an Honor Everywhere virtual visit.

This makes a difference! 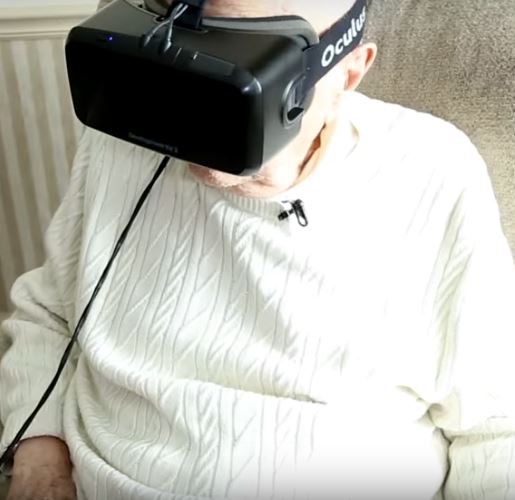 Photo credits: of the Central Missouri Honor Flight 2012 at the World War II monument and second photo is from the Honor Everywhere website video of the virtual experience.