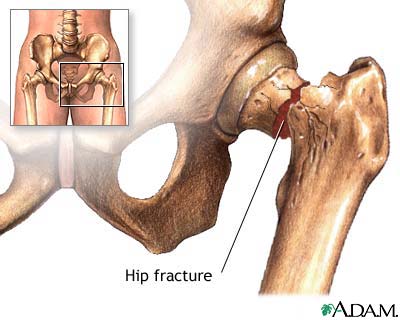 I’d like to briefly turn readers attention to two terrific papers published recently in the Annals of Internal Medicine on the timing and outcomes of surgical hip fracture repair.

This study illustrates an interesting research principle called “selection bias.”  In the raw unadjusted analysis, outcomes were worse for those with delayed time to hip fracture repair (less than 48 hours).  After adjustment for the severity of illness of patients prior to surgery, however, the outcomes were pretty much the same, regardless of the timing of surgery, except for patients with very long delays (greater than 5 days), where the outcomes were still worse.  Most of the differences in outcomes were due to severity of illness, not timing of surgery – younger healthier patients went to surgery earlier, and had better outcomes.  This selection bias explained most of the discrepancy in the relationship between timing of sugary and mortality/post operative complications.

In the accompanying editorial by William Hung (not that William Hung, a Geriatrician and palliative medicine doc at Mt. Sinai) and Sean Morrison (a Geriatrician at Mt. Sinai and immediate past president of the American Academy of Hospice and Palliative Medicine) described hip fracture as “the quintessential geriatric illness.”  They say:

It is a rare patient with hip fracture who does not have a comorbid condition, such as dementia or frailty; multiple chronic diseases; or functional impairment, particularly with respect to locomotion or transfer, before the hip fracture event. Thus, medical reasons for delaying surgery are the rule rather than the exception. Although hip fracture is typically regarded as a surgical condition, the poor underlying health status of the patient population, coupled with the effects of hip fracture on functional status and existing comorbid conditions, means that nonsurgical aspects of care are critical to optimizing clinical outcomes.

Mortality and post-surgical complications aside, they argue for early hip fracture repair on the basis of evidence demonstrating improved pain control with early surgical intervention.

The big remaining question for me is not so much about the timing of surgery, but non-operative options for hip fracture.  Is not having surgery an option?  For which patients, and under what circumstances?  I briefly cared for a patient with advanced dementia who was mostly bed bound in the nursing home prior to falling and fracturing her hip.  The surgeons’ recommended a non-surgical approach because: (1) she was non-ambulatory at baseline, (2) she would not be able to lie still after the repair or participate in rehabilitation, (3) she had a limited life-expectancy, (4) her fracture was non-displaced (the bones still lined up well), and (5) she was not in much pain, and her pain was responsive to simple analgesics (I think just tylenol after a few days).  I’m not sure how things turned out for her.  Have others had any experience with non-surgical management?  Does anyone know of any data?  In the absence of a surgical repair, I imagine pain control must be challenging.