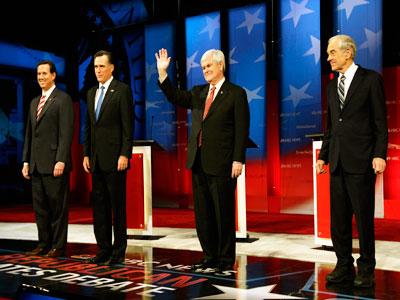 We have learned a lot of lessons in Hospice and Palliative Care about how political discourse can impact our field and the care we give to individuals with serious illnesses.  You only have to go back to January of 2011 to see how the hysteria around death panels led to the removal of legislation that would have reimbursed physicians for advance care planning discussions.

As the GOP primaries continue to heat up, it will be important for us as a field to continue to pay attention to the rhetoric used on the campaign trail and discussed on nationally telavised debates.  One interesting yet brief exchange took place between in Tampa, Florida on January 23, 2012 between Newt Gingrich, Ron Paul, Rick Santorum, and Adam Smith of The Tampa Bay Times. This transcriptwas provided by the Chicago Tribune (and a big thank you to the reader who emailed me this exchange):

SMITH: Thank you.
Senator Santorum, in 2005, Florida was in the middle of a huge national debate over Terri Schiavo, whether her feeding tube should be removed after the courts had ruled that she had been in a vegetative state for years. You were at the center, at the front of advocating congressional intervention to keep her alive. You even came down here, came to her bedside after a fund-raiser.
Why should the government have more say in medical decisions like that than a spouse?

SANTORUM: Well, number one, I didn’t come to her bedside, but I did come down to Tampa. I was scheduled to come down anyway for that event, and it so happened that this situation was going on.
I did not call for congressional intervention. I called for a judicial hearing by an impartial judge at the federal level to review a case in which you had parents and a spouse on different sides of the issue.
And these were constituents of mine. The parents happen to live in Pennsylvania, and they came to me and made a very strong case that they would like to see some other pair of eyes, judicial eyes, look at it. And I agreed to advocate for those constituents because I believe that we should give respect and dignity for all human life, irrespective of their condition.
And if there was someone there that wanted to provide and take care of them, and they were willing to do so, I wanted to make sure that the judicial proceedings worked properly. And that’s what I did, and I would do it again. (APPLAUSE)

SMITH: Do not resuscitate directives, do you think they’re immoral?

SANTORUM: No, I don’t believe they’re immoral. I mean, I think that’s a decision that people should be able to make, and I have supported legislation in the past for them to make it.

SMITH: Speaker Gingrich, in that case the courts had ruled repeatedly. How does that square, the Terri Schiavo, action with your understanding of the Constitution and separation of powers?

GINGRICH: Well, look, I think that we go to extraordinary lengths, for example, for people who are on murderers row. They have extraordinary rights of appeal.
And you have here somebody who was in a coma, who had, on the one hand, her husband saying let her die and her parents saying let her live. Now, it strikes me that having a bias in favor of life, and at least going to a federal hearing, which would be automatic if it was a criminal on death row, that it’s not too much to say in some circumstances your rights as an American citizen ought to be respected. And there ought to be at least a judicial review of whether or not in that circumstance you should be allowed to die, which has nothing to do with whether or not you as a citizen have a right to have your own end-of-life prescription which is totally appropriate for you to do as a matter of your values in consultation with your doctor.

SMITH: Congressman Paul, you’re a doctor. What was your view of the Terri Schiavo case?

PAUL: I find it so unfortunate, so unusual, too. That situation doesn’t come up very often. It should teach us all a lesson to have living wills or a good conversation with a spouse. I would want my spouse to make the decision. And — but it`s better to have a living will.
But I don’t like going up the ladder. You know, we go to the federal courts, and the Congress, and on up. Yes, difficult decisions. Will it be perfect for everybody? No. But I would have preferred to see the decision made at the state level.
But I’ve been involved in medicine with things similar, but not quite as difficult as this. But usually, we deferred to the family. And it wasn’t made a big issue like this was. This was way out of proportion to what happens more routinely.
But I think it should urge us all to try to plan for this and make sure either that one individual that’s closest to you makes the decision or you sign a living will. And this would have solved the whole problem.

So what do you make out of this?  Are you encouraged that the candidates have at least some healthy respect for Advance Directives and the right not to have CPR performed upon them?  Are you dismayed by some of the statements about judicial review for end of life decisions?

I for one am hopeful as the language used in this debate is very different than the language used during the debates about health care reform (in particular the provision to pay for advance care planning consultations).  I also can’t help but to see the connection between this debate and something Diane Meier said in 2009 during a panel discussion with the Health Affairs Journal:

despite the current controversy over the advance care planning consultation provision, the ongoing debate “will turn out to be positive, as the Terry Schiavo debacle turned out to be positive. … We’ve begun to turn the tide on the lies about death panels. That’s all they are – lies – and we need to keep saying that.”

Yes, we may have lost the battle in regards to the Advance Care Planning Consultation proposal, but the war is far from over.