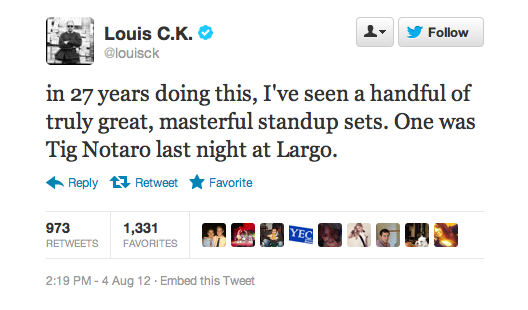 Tig Notaro was diagnosed just three days before a standup comedy set with invasive cancer in both of her breasts. What happened afterwards is quickly becoming the stuff of Internet legend. She decided to get up on stage and deliver a half and hour act that quickly make the social media rounds.

It started off with comedian Lewis C.K.’s tweet: “in 27 years doing this, I’ve seen a handful of truly great, masterful standup sets. One was Tig Notaro last night at Largo.” The larger media outlets came quickly after, including interviews on NPR and This American Life.

So what’s all the fuss about?

Notaro was brutally honest and open about a subject that is often taboo to talk about in many settings. During the set she talks about a stream of personal tragedies that led up to the diagnosis of cancer including a pneumonia, a C. difficile infection, a traumatic death of her mother from a fall, and a breakup from a longstanding relationship. She does this in such a way that is so raw that it is nearly impossible not to be moved.

She also talks about this on such a personal level that it feels like you are hearing about the diagnosis from one of your closest friends.  Indeed, during the throughout the entire routine she continuously attempts to assure the audience that everything is going to be ok. Take this line:

I highly recommend listening to this if you haven’t yet.  If you want to listen to the first 15 minutes for free, go to the This American Life website where you can find Ira Glass’s interview with her as part of the “What Doesn’t Kill You” podcast. I though highly recommend listening to the whole act. It can be downloaded for $5 at Lewis C.K.’s website