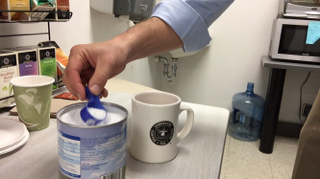 If this many individuals are on thickened liquids, there has to be some evidence to back it up, right?

Thickened liquids are most commonly used in individuals with dysphagia to improve the ability to safely swallow liquids with the hopes of preventing aspiration, pneumonia, and death. Most of what we have regarding the benefits of thickened liquids comes from bedside or videofluoroscopic evaluation looking at risk of aspiration during the evaluation.   However, what we really care about is not the short term risk of aspiration of thin liquids during the exam, but the longer term outcomes like pneumonia which is the primary cause of death seen with aspirations.

The best evidence we have on the risks of pneumonia or death after treatment with thickened liquids comes from a randomized controlled trialpublished in 2008 in the Annals of Internal Medicine.  The study included 515 hospital or nursing home patients age 50 years or older with dementia or Parkinson disease who aspirated on thin liquids during videofluoroscopy.  The patients were randomized to drink all liquids using a chin-down position, or to drink nectar-thick liquids, or to drink honey-thick liquids. The main outcome of interest was 3-month cumulative incidence of pneumonia.  The authors of this study also looked at mortality at 3 months and at adverse effects. What they found was the following:

There are a couple of big limitations to this study when trying to generalize it to the patients that we see on a daily basis.  The biggest is that while all the patients had aspirations on exam, the study included only those patients who did not benefit preferentially from either chin tuck or thickened fluids on videofluroscopy.  So, we still don’t know if those who seem to benefit from thickened fluid during videofluoroscopic evaluation actually have better long-term outcomes on these diets.

What are the harms:

Having taken the thickened liquid challenge (#thickenedliquidchallenge) I can attest to some of the biggest side effects from thickening the fluids that we normally drink: thirst, dry mouth, dehydration, and a feeling of fullness. I was dying of thirst 12 hours into the challenge despite trying to take in enough thickened liquids. Part of this was due to the fact that I just wasn’t taking in enough fluid because of the poor taste of the thickened liquids and because the thickener made me feel full from all that starch. This is consistent with current research that individuals who take in thickened liquids consume less fluids than if they were to consume regular thin liquids. The other part that added to my discomfort was was that thickened liquids never really quenched my thirst no matter how much I drank of it.

Does thickening fluids help individuals with swallowing problems?  Despite my research into this question, I’m left with the unsatisfying recognition that I just don’t know.    It does appear to help decrease risks of aspiration of liquids during videofluoroscopy, but we don’t have very good data to say that it will prevent aspiration pneumonias or death.  It is at best an educated guess.

The uncertainty of benefit is really the take home point.  When we talk to patients and family members about potential interventions for dysphagia, we must be honest with the fact that we don’t have very strong evidence that it will prolong their lives, although we may have some evidence that it will decrease aspirations.   We also can tell them that thickened liquids may increase their chances of becoming dehydrated, it may not quench their thirst, and they may not like the taste.

Note: This post is part of the series on the #ThickenedLiquidChallenge.  To watch the videos of this challenge go to our original post here, or check out the videos on YouTube: