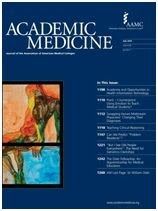 What happens when you randomly assign medical students to either a mandatory two week rotation in specialized geriatric training or to a traditional non-geriatric clerkship that sees a lot of old people? Will there be any difference in the knowledge of geriatric conditions, the attitudes toward older adults, or geriatric clinical skills between the two groups?  Or does mere exposure to an aging patient population give students the training they need to care for older patients? These are the questions asked by Laura Diachun and colleagues in a recent article published in Academic Medicine.

The authors randomly assigned 262 Canadian medical students over the course of two years to complete either a clerkship year containing a two-week rotation with a combined geriatric medicine/geriatric psychiatry focus, or to a normal “But I Already See Old People” clerkship year. The geriatrics rotation included working with geriatric medicine and psychiatry specialists in various inpatient and outpatient clinics and community settings, as well as receiving small group teaching sessions on geriatric topics from faculty in geriatrics, social workers, physiotherapists, occupational therapists, and pharmacists. The “But I Already See Old People” control arm of the study did a two-week rotation in otolaryngology/ophthalmology and continued to evaluate and manage older adults throughout their usual clerkship rotations.

The study used a pre/post testing prior to and after the students clerkship year to assess to knowledge and attitudes in geriatrics. The authors also used a objective structured clinical examination (OSCE) five months after the conclusion of the clinical clerkship to test clinical skills.

The baseline knowledge scores on tests of geriatric knowledge and attitude didn’t differ significantly between the two groups. Post-clerkship knowledge of geriatrics was significantly better in the geriatrics rotation group than the “But I Already See Old People” group. Self-reported clinical practice also was improved in the geriatrics group with more reporting completing tasks like a Mini-Mental Status Examination (MMSE) on a greater number of older patients. The geriatrics group also scored significantly higher than the “But I Already See Old People” group in the observed structured clinical exam, and had a higher pass rate (95%) than did those in the control group (78%). Interestingly, both groups experienced a worsening of their attitude toward older adults over the course of their respective clerkships, with little difference between the two groups.

Overall I thought the authors did a nice job debunking the assumption that geriatrics can be effectively taught by mere exposure to old people.  Those with specialized geriatric training do acquire more knowledge and demonstrate better skills in geriatrics than those without this training. This study should serve as a stimulus for medical school to rethink how we will train the physicians of the future on how to care for an aging population.

The only question for me is why attitudes toward older adults worsened for both groups over the course of a one year clerkship and what can we do to remedy this.  Any thoughts?