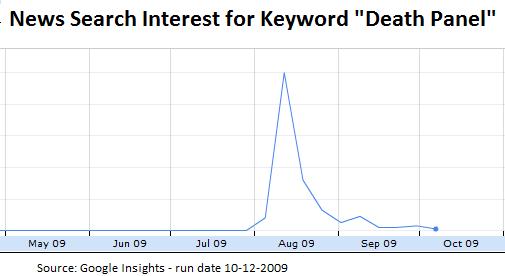 The hysteria around “death panels” has largely died down (no pun intended). This largely coincided with the removal of the provision to reimburse doctors for discussing end of life planning from the health care reform bill. So it was a shock to see PBS use the title “Life Panel? Death Panel?” in its most recent PBS Now series (for a quick review of the episode check out pallimed’s review). I can’t recite the exact adjective-laden prose I yelled at the TV but it went something like this: “For heaven’s sake, let the death panel rumor die a natural news cycle death.  It was on its way out – why are we keeping it alive? Pull the plug on it already!!!” Since watching the episode I have been wondering why the only time I hear the term “death panel” nowadays is in the context of blogs, advocacy groups, and news sites promoting end-of-life decision making. It turns out that the term death panel has become somewhat of a rallying call in the field of hospice and palliative care. The myth of death panels stimulated discussion about what end-of-life care should be about and what palliative care really does.  Case in point – the google news search interest in the keyword “palliative” has skyrocketed since late July, coinciding with the introduction of the term “death panels” in the general press (thanks to Sarah Palin’s facebook post).  Best of all, the interest level has stayed high despite the drop in usage of “death panels”.

Looks like Diane Meier was right in her panel discussion with the Health Affairs Journal:

despite the current controversy over the advance care planning consultation provision, the ongoing debate “will turn out to be positive, as the Terry Schiavo debacle turned out to be positive. … We’ve begun to turn the tide on the lies about death panels. That’s all they are – lies – and we need to keep saying that.”

Yes, we may have lost the battle in regards to the Advance Care Planning Consultation proposal, but the waris far from over.

In today’s podcast we talk with Dr. Rajagopal (goes by…

Comics and Humor in Palliative Care: A Podcast with Nathan Gray

Comics. Cartoons. Graphic Novels. Graphic Medicine.  I’m not sure what…