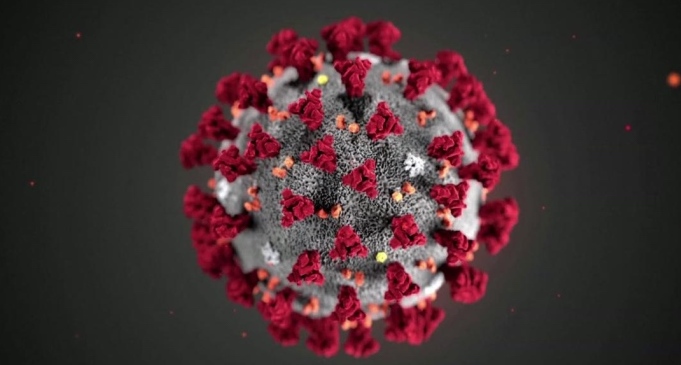 So what is the prognosis in COVID infections? 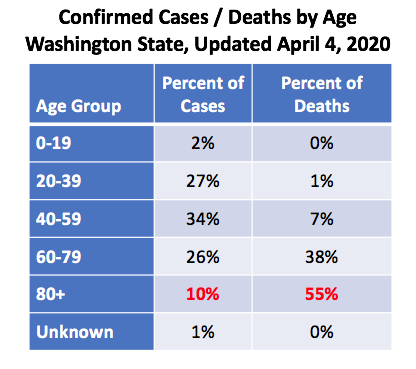 COVID-19 data out of Washington for older adults is sobering: only 1 out of 10 cases are in individuals who are 80 years and older, yet this age group accounts for 55% of all deaths. If you group all adults over 60, they make up a third of the confirmed cases and a staggering 93% of all deaths.

Data from around the US also shows that age is a strong risk factor for hospitalization, ICU admission, and mortality. The following is data coming from CDC looking at US cases from February 12 to March 16th. 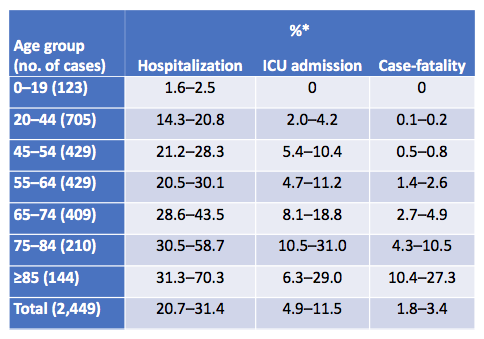 Around the world, the numbers look about that same too, with a case fatality rate around 15-20% for those 80 years and older (data from Lancet and JAMA). 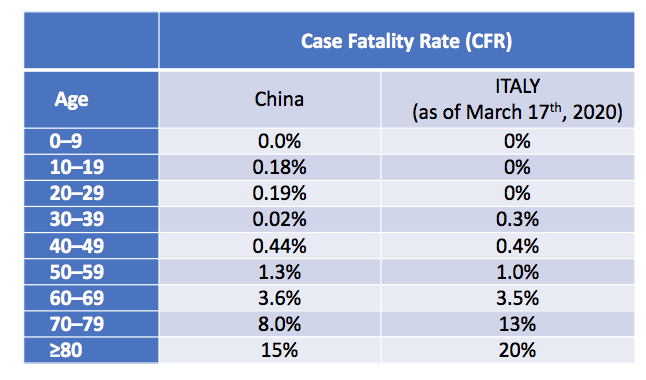 Case fatality rates are defined as the number of deaths in persons who tested positive for SARS-CoV2 divided by number of SARS-CoV2 cases. The case fatality rate is a hard number to pin down due to a lot of factors, such as only the sickest cases early on get tested which likely worsen case fatality rates, but also data on age and outcomes tend to be missing, which can underestimate these outcomes. Also, one needs time to follow-up on outcomes, and with extended ICU stays that we see with COVID, we really don’t know real death rates until weeks (maybe a month) after symptoms arise.

Importantly though, just because someone is older, doesn’t mean that they will die from this virus. The majority don’t. Even if you look at nursing home populations, the majority are alive (at least at the time of reporting). For example, lets look atdata coming out of one King Country nursing facility published recently in the NEJM.  The median age of the confirmed COVID case was 83.  Over half were hospitalized and 34% died.  However, 66% were still alive at the time of reporting.

2. What about those who were sent to the ICU?

These numbers are even harder to define because of the long clinical course in the ICU for many patients means that we don’t have any clear data. For example, a lot was made out of the ICNARC data looking at critically ill patients in the UK.  Lots of folks focused on the fact that 346 patients had died and 344 patients were discharged alive. On quick glance, that’s a 50% mortality rate.  However,  most patients were still in the ICU at the time of reporting (1559 out of the total 2249 patients).  So the data is really to early to give any indication of what the real ICU mortality rate is.  But if you just look at those 70 years of age and older who had data reported on outcome (i.e they were not still in the ICU), 32% were discharged alive (again, take these #’s with a huge grain of salt, as most were still in the ICU at the time of reporting).

Outside of this study, I only know of two smaller studies that seem to confirm a high mortality rate (send me more if you got them). If you look at one report out of China looking at 52 critically ill adult patients with SARS-CoV-2 pneumonia who were admitted to the intensive care unit (ICU). They found 62% died at 28 days, with a median duration from admission to ICU death of 7 days for non-survivors. The numbers were worse for those requiring mechanical ventilation (81% requiring mechanical ventilation had died by 28 days). But these were early data, so be cautious about extrapolating this data.

We also see similar high mortality rates in the ICU out of early data from Evergreen hospital in Washington state looking at 21 critically ill patients with COVID-19 with a median age of 70. As of March 17, mortality was 67% and 9.5 were discharged from the ICU.  However, 24% of patients remained critically ill, so the overall ICU mortality rate is somewhere between 67% and 91% depending on what happens to these individuals.  We do know that the majority of these 21 individuals were linked to exposures at a skilled nursing facility, so we don’t really know what the overall ICU rates look like yet for the general population, but it certainly does not look good for older nursing home patients.

We also have a much larger dataset on disposition from COVID-only Intensive Care Units (ICUs) in Lombardy Region, Italy
(most of whom were mechanically ventilated, but not all) shows similar
numbers.  But importantly many still remain in the ICU(orange bars in
graph below) making this still very preliminary. 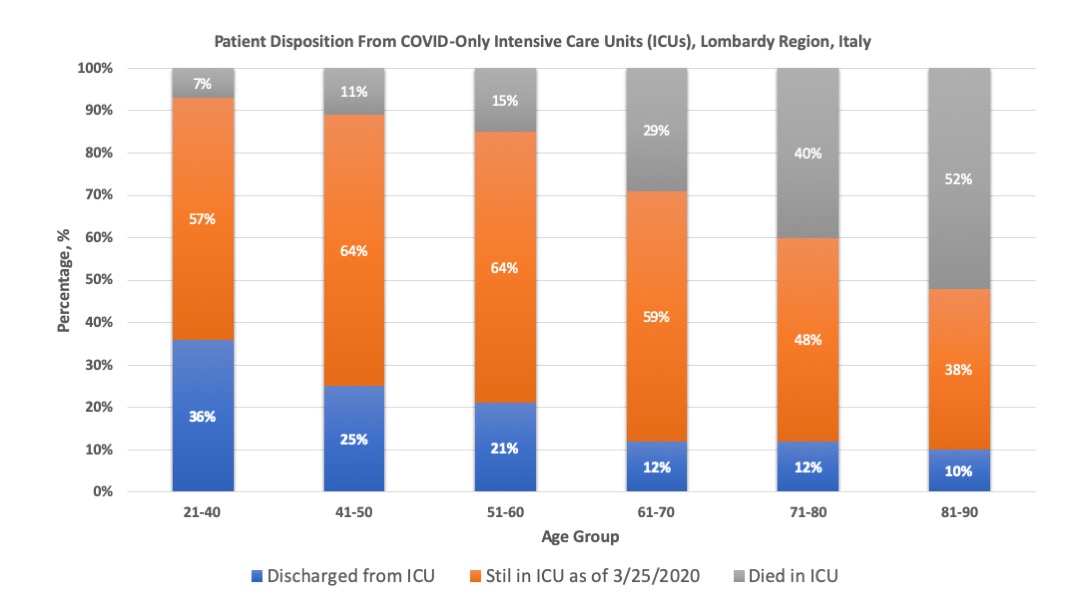 There has been a lot of talk about a new study in JAMA on the outcomes of hospitalized patients in the New York City area. The headline was shocking in the news: mortality for those who received mechanical ventilation was 88%. However, lets take a little bit of a deeper dive before we use this number when we talk to patients and family members about prognosis after mechanical ventilation due to COVID.

If I had to sum it up the prognosis for mechanically ventilated patients in this NY study, I would say something very different: out of the 1,147 patients over the age of 18 who were mechanically ventilated, 3% were discharged alive, 25% died, and 72% were still alive in the hospital. So, we really don’t know what the outcomes are as the follow-up time for most patients still alive in the hospital was so short (about 5 days). We do know though that overall mortality will be somewhere between 25% and 97%, and worse for those who are elderly (see graph below). 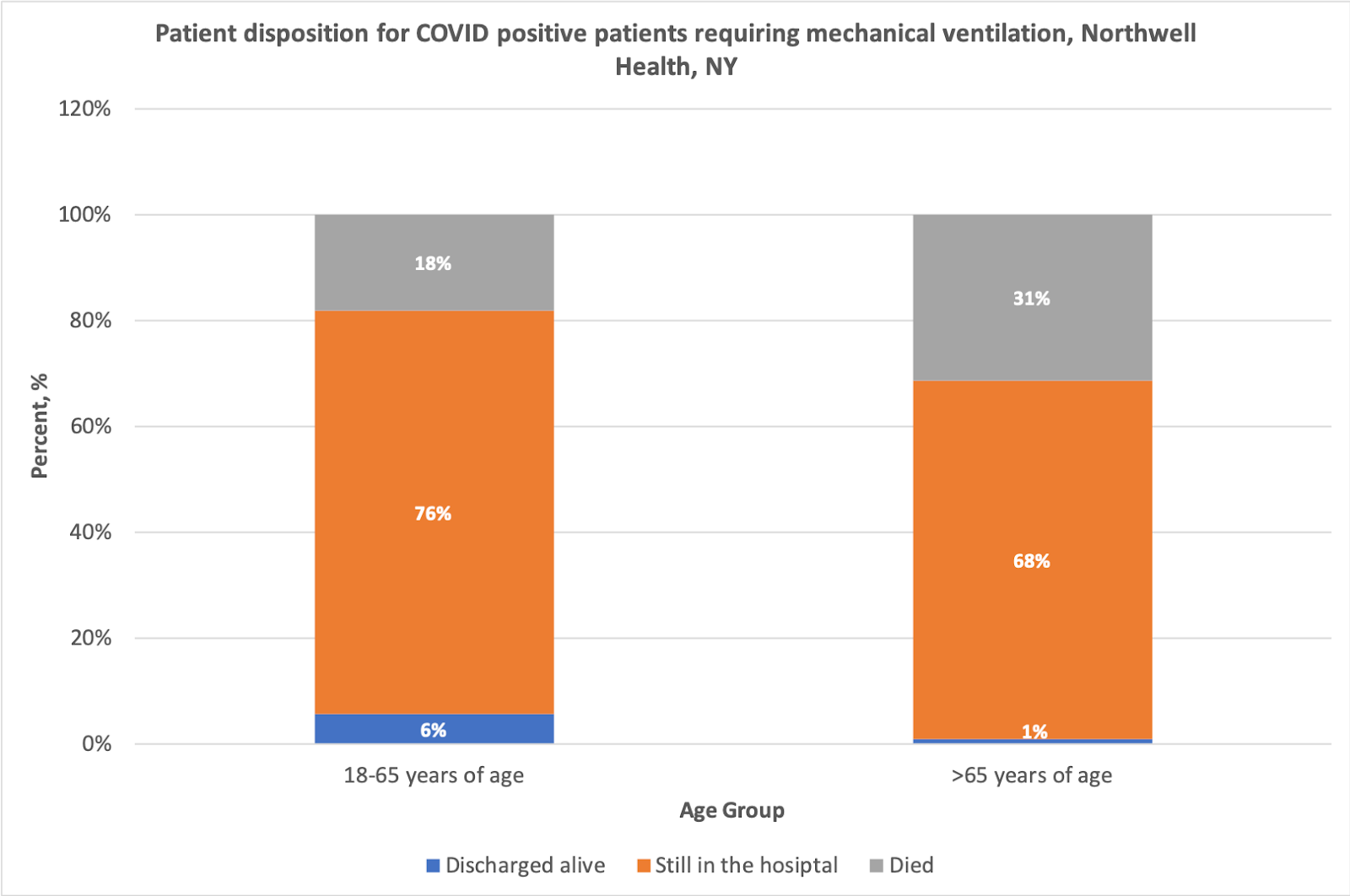 So, where does the new JAMA article on outcomes among 5,700 patients hospitalized with COVID-19 in the New York City area fit in?    I would
say that it is in-line with what we are seeing in Italy.    Mortality is
significantly worse in older adults requiring mechanical ventilation,
but because most individuals are still alive in the hospital, we really
don’t know what the final outcomes are yet for these individuals.

3. What about outcomes of hospitalizations in COVID?

The data here are also a little too preliminary to tell where the overall fatality rate is going to be, although we know its worse with increasing age.   Data from the JAMA article on 5,700 patients hospitalized with COVID-19 shows that 53% of individuals hospitalized with COVID remained hospitalized at the time of reporting, 37% were discharged alive, and 10% died.   The following chart breaks that up by age.  The orange bars are those that are still alive in the hospital, but we dont yet know if they will be discharge alive (and in what condition) or will die in the hospital. 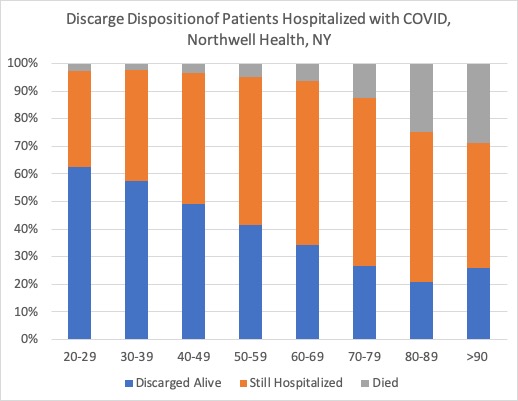 In a recent NEJM article, overall in-hospital mortality was 5.8% (515) in the 8910 patients with completed outcomes (either died or discharged).   The issue with this study is that we don’t know the percent of patients who were still alive in the hospital.  It does look like though with this study that if you have a longer follow-up period, the mortality rates are looking lower than the 10% seen in the JAMA study above.

4. Outcomes with after CPR in COVID positive patients

Data remains limited to clearly define CPR outcomes in COVID, although what we have gives us a strong suggestion that the outcomes are very, very poor.  We have one study looking at in-hospital cardiac arrest data out of Wuhan, China. Of 136 patients who underwent resuscitation efforts, ROSC [Restoration of Spontaneous Circulation] was achieved in 18 (13.2%) patients, of which only 4 patients were still alive at 30 days (see below how the data changes with age).  Only 1 patient survived with a favourable neurological outcome as defined by CPC score of 1 or 2.  The majority of patients who coded were in an initial rhythm of asystole (122 out of 136).  Only one of these patients survived at 30 days. 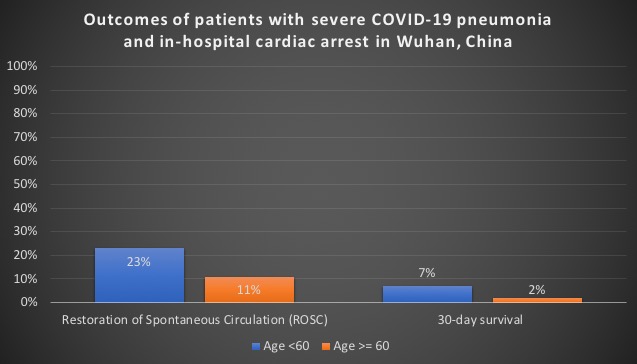 NOTE: If you want more GeriPal COVID content, including podcasts with front line providers in Seattle and New York, check out our new COVID page.

Copyright 2022 - GeriPal - All Rights Reserved
Back To Top
Search