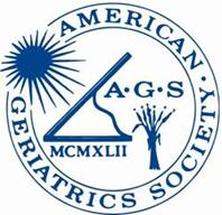 It’s time to up the ante on the push to get more GeriPal readers on twitter. Today, we have Nancy Lundebjerg (@nlundebjerg), Deputy Executive Vice President and Chief Operating Officer of the American Geriatrics Society, answering some questions on why twitter matters. She also just gave me word that all Reynolds Grantees Attending#DWRF12 can win an iPad by tweeting and successfully answering short daily questions via @theBlueCast (for more info on the game check out AGS’s website here.

Widera: In your opinion, why should we get on twitter?

Lundebjerg: It’s a very powerful tool for getting the word out about geriatrics and palliative care You can use it to communicate to the world and with each other. Most politicians are on twitter and we have not yet begun to tap the power of including a mention of them in our twitter messages.

Widera: Can you give an example of an interesting way twitter can be used in geriatrics or palliative care?

Lundebjerg : There are two debates left to go – use it to message about what needs to happen in care for older adults.

Widera: Do you use twitter during national meetings? If so, how and why?

Lundebjerg: Yes. I use it to bring some personality to the meeting (see Where in the World is Jim Pacala) and to share inspiring statements from speakers with peers who are not in attendance. 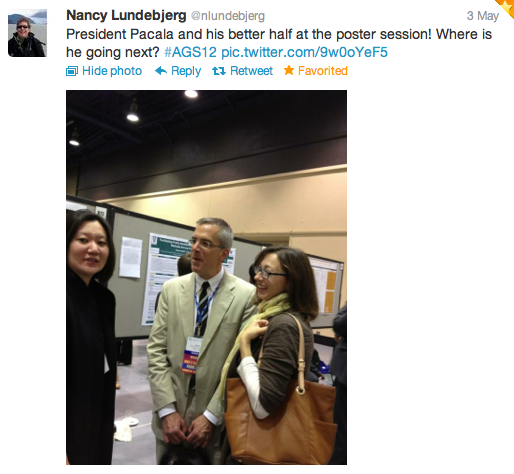 Widera: How do you find the time to read and respond to all those tweets?

Lundebjerg: I follow an eclectic bunch of people on twitter – making it a great news feed. I generally pop in about 3-4 times a day to see what is going on. Retweeting something takes a nanosecond and modifying a tweet takes slightly longer. You don’t have to respond to everything nor do you need to read everything.

Widera: Do you use twitter to talk about something other than geriatrics or palliative medicine?

Lundebjerg: Yes, I’ve used it to get refunds for terrible service. Right now I use it mostly for work but plan to transition to include tweets from my blog or Pinterest. Some people have more than one handle and I’ll probably do that for when I want to tweet about my personal blog or Pinterest. By the by, I am waiting for someone to crack the mystery of Pinterest when it comes to family caregiving. The demographic is exactly right but anything remotely serious seems to go just go thud.

Lundebjerg: Following others is a great way to build up a follower base. People will generally follow you back if you follow them. Don’t use the approval process for letting people follow you – it’s pretty easy to weed someone out if they are inappropriate. Start by retweeting and build your original tweet muscle up slowly – it does take practice to get to where you can say something pithy in 140 characters but you will get there. Have fun!

Lundebjerg: I follow you (@ewidera), Ken Covinsky (@geri_doc), Diane Meier (everyone follows Diane!) and am now following any Reynolds attendee (go to @nlundebjerg for a list of those folks). I also follow a bunch of tech folks, the usual suspects in terms of organizations, reporters that cover health and Washington politics, and a number of medical journals.

Widera: You keep on mentioning @TheBlueCast.  What is it and what are you trying to do with it?

Lundebjerg: Our Titter team grappled for a while with what handle to use and decided that because we are running a special contest for Reynolds attendees, we would create a new handle. From there, it was a question of whether we wanted to do something a little mysterious with the potential to go viral (we dream of being Big Bird here at AGS!) and TheBlueCast was born. The interesting thing about the handle is that it could easily be used to illustrate problems with activities of daily living throughout the year so the handle may live on beyond the meeting!