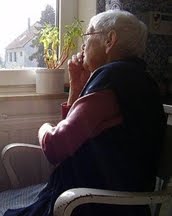 When I was 16 years old, I decided to volunteer in a nursing home.

On my first day, I visited with a woman whose son was supposed to come and take her to church. While she sat in her Sunday best, we flipped through a family photo album, looking at pictures of people whose names she had forgotten. After a couple of hours, I asked the geriatric aide if we should call the son to see if something had happened to him. I was told, “He stopped coming last year, but she doesn’t know – she has Alzheimer’s disease.”

I remember feeling upset with this woman’s family for neglecting her. I vowed then to always care for my mother, especially as she would need the support once my brother and I reached adulthood and pursued our respective paths away from home.

Well, that was 12 years ago and a lot of my childish naiveté has faded. Don’t get me wrong – I love my mother and care very much for her well-being, but I have professional and personal duties to which I am committed that make it difficult for me to actively attend to her needs.

For instance, when she calls to complain about the neighbor who stole her planter, I am too preoccupied with completing my medical school applications to be sympathetic. When a three-day weekend rolls around, I make plans to bike across the Golden Gate Bridge with my out-of-town friends while my mother sits at home 300 miles away wondering why I haven’t sent her my travel itinerary for Labor Day weekend.

I’m a young professional leading a vibrant life in one of the best cities in the world – so what if I’m a little too busy to visit my lonely mother? Well, China is hoping to teach people like me a thing or two about taking their aging parents for granted.

In China, what used to be a filial duty may soon become a legal duty.

As of January this year, the country’s current elder law, called the Law of the People’s Republic of China on Protection of the Rights and Interests of the Elderly, underwent a draft amendment that would require adult children to care for the social and spiritual needs of their elderly parents. That means not visiting one’s elderly parents, who may legally claim their right to receive physical and social care from their children, may be punishable in a court of law.

With global news of elder abuse and neglect in institutionalized settings on the rise, China is, perhaps, taking steps to delay institutionalization of elders who may have family to care for them. This in turn could decrease the rate of premature deaths of elders who are grossly neglected in nursing homes. Did anybody hear about the 89-year-old Australian nursing home resident who was strapped to a toilet seat for two hours and left to die?

I’m not insinuating that all nursing homes or assisted living facilities are bad. I’m not even implying that all children who admit their elderly parents into these institutions are neglectful (heck, I’m in no position to judge because I haven’t exactly been Daughter of the Year material).

I’m just saying that China may be on to something here. I mean, social support could ward off depression in elders, which could protect against cognitive decline, which could prevent or delay nursing home admissions, right?

Although I acknowledge that court-mandated visits with elderly parents may be more feasible in a country that supports a traditional culture of revering one’s elders and caring for one’s parents, I think other countries would do well to take encouragement from China’s elder laws.

Well, for what it’s worth I’m not waiting for a court order to visit my mother. In fact, I’m planning to make a trip down to southern California to see her for the Veteran’s Day weekend…better late than too late…or never.

My five-year old sons favorite show on TV is called…