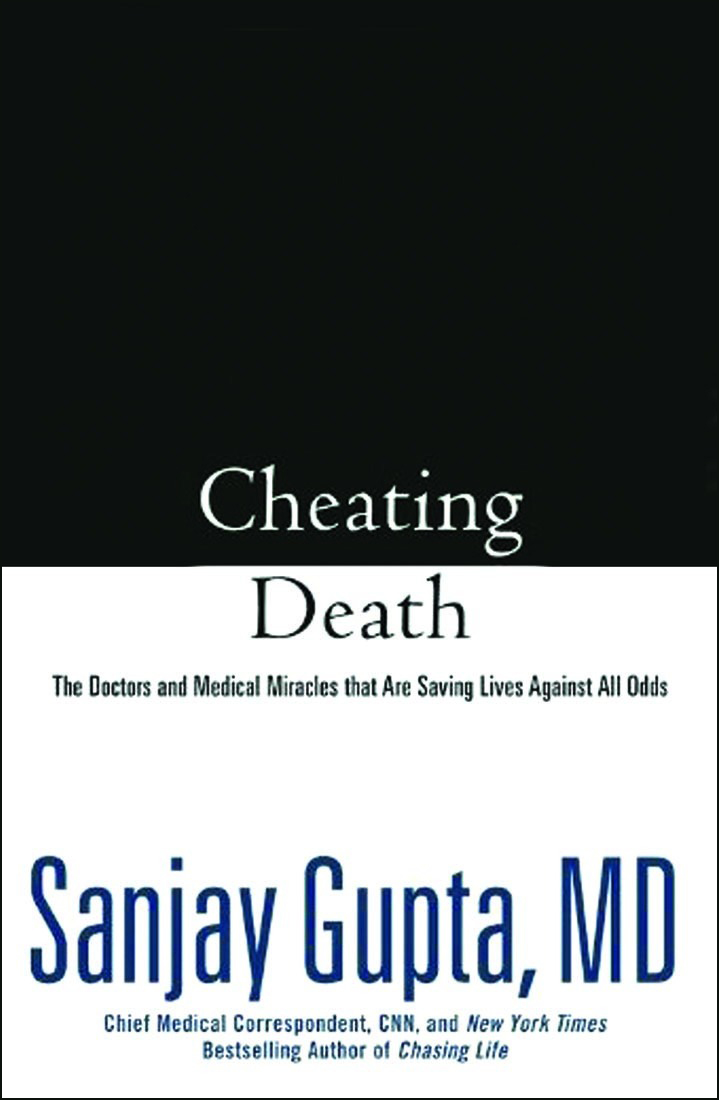 “Death is not a single event, but a process that may be interrupted, even reversed. And here’s the exciting part – at any point during this process, the course of what seems inevitable can be changed. That is precisely what we are going to explore in this book: the possibility of cheating death.”

These are the words of Dr. Sanjay Gupta, a practicing neurosurgeon, the chief medical correspondent to CNN, an almost Surgeon General, and now author of the book Cheating Death. Cheating Death is, in Dr. Gupta’s own words, a “medical thriller”. This is an apt description considering the dramatic prose that the author infuses into this book. Dr. Gupta lavishly uses inspirational and exceptional real life stories to make his point that medical science is blurring the distinction between life and death. His tale weaves the science of hypothermia protocols, CPR resuscitation techniques, hibernation and suspended animation research, near death experiences, and fetal surgeon into a gripping argument that if you and your physician “fight” hard enough, and don’t “give up”, you can overcome practically everything, even death [insert collective GeriPal groan here].

I completely understand that I am not the intended audience of this book. I also understand that this book is intentionally sensationalistic, as most mass journalism is today. However, even if I resign myself to read this book as a piece of modern infotainment, I am still unable to get past its biggest flaw – the complete lack of consistency when using the term “death”.

Dr. Gupta does an excellent job near the beginning of the book describing death as not as an event, but a process. He views it as an “ongoing chain of events that might be reversed with the right intervention”. This sounds like a similar definition to those described by some in the palliative care field when discussing DNR status with patients (“If you were to die, would you like us to try to resuscitate you”). It is also similar to the description of death used by the character Miracle Max in the Princess Bride when describing a seemingly lifeless body in front of him:

“It just so happens that your friend here is only MOSTLY dead. There’s a big difference between mostly dead and all dead. Mostly dead is slightly alive.”

Dr. Gupta however seems to jump in and out of the process of death definition throughout the book. His anecdotal accounts of people who “cheat death” range from people who were “dead”, “clinically dead”, “virtually dead”, “nearly frozen to death”, and “returned from the dead”. Sometimes he uses these various terms interchangeably when discussing the same patient. Even when he describes death as a cascade of physiologic and metabolic events, he hedges by saying that these are steps “toward death”.

This lack of clarity or consistency comes to a climax in the chapter titled “What Lies Beneath”. Dr. Gupta seemingly confuses “brain death”, coma, and persistent vegetative state, something that I find unforgivable in a book written by a neurosurgeon. His main example was that of Mark Ragucci:

“You won’t find a better example than Ragucci. His doctors might have given up, but he can tell the story today because one doctor didn’t – and because something inside Ragucci was able to bounce back, something that gave him the strength to cheat death: brain death.”

Mark Ragucci was never declared brain dead. He was placed in a medically induced coma for refractory seizures and suffered severe brain injury from strokes, but at no point in time was he declared brain dead (Dr. Gupta’s definition does seem to change later in the chapter when he states that Mark was “nearly brain dead”). Am I reading too much into this considering the lack of clarity of this chapter? I would say no. The publishers own synopsis of the book makes clear where the book stands on the concept of brain death:

Extended cardiac arrest, “brain death,” not breathing for over an hour-all these conditions used to be considered inevitably fatal, but they no longer are.

When discussing the diagnoses of “brain death, vegetative state, and minimally conscious state” Dr. Gupta goes on to say that “a patient may improve or decline from one state to another”. Really? Declaring someone dead by brain death criteria does take some expertise, and there have been some misdiagnoses reported, but to make a statement that patients who meet the criteria for brain death can improve and “cheat death” is reckless and harmful. There is a great deal of misinformation about brain death in the lay public and in the media. Dr. Gupta’s use of the term “brain death” only worsens this confusion.

I will say, in defense of Dr. Gupta, attempting to define death is an incredibly complex task, as seen by the great deal of literature attempting to discern what death actually means. The “process” definition of death as used in this book, one in which someone can go in and out of death by having physicians who “don’t give up”, is lacking one critical concept – permanence. Once someone is dead they remain dead. The “irreversible” nature of death may depend on someone’s cultural and spiritual beliefs. For some death may not be rooted in science or physical laws; death may only mean that the soul, or metaphysical spirit, no longer animates the body. However, from a medico-legal and clinical aspect, permanence is integral to any societal criteria of death. Death certificates, clinical trial outcome data, practical needs of family members, and organ donations rely on the irreversible nature of death.

Dr. Gupta put in a tremendous amount of work to search for the most extraordinary and sensational cases in order to make his story dramatic. Yet, in doing so, he loses sight that everyday stories do a better job in describing the fine line between life and death. Dr. Gupta may do well by heeding author Mitchell Stephens warning:

“When journalists confine themselves to the search for the violent or the miraculous, not only do they paint a grotesque face on the world, but they deprive their audiences of the opportunity to examine subtler occurrences with larger consequences”.