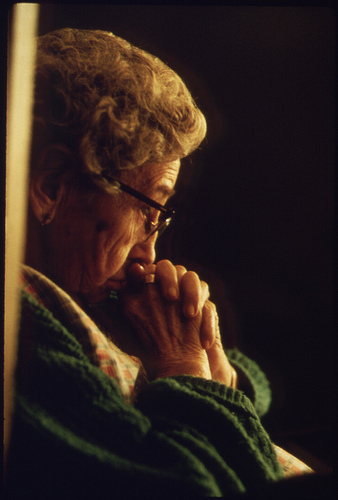 Depression is the most common mood disorder in elderly individuals with Alzheimer disease, with prevalence rates somewhere between 15% to 57%. One major difficulty in dealing with this issue is the inherent difficulty in diagnosing depression in dementia, as evident in the huge prevalence range that I just cited. The other difficulty is figuring out how to treat it.

Antidepressants so far have only showed mixed results in the few studies that have examined their efficacy in Alzheimers. Unfortunately, most of these studies have been either too small or too poor of quality to give much guidance.The Health Technology Assessment Study of the Use of Antidepressants for Depression in Dementia (HTA-SADD) significantly changes this landscape. This multicenter, double-blind, placebo-controlled trial is the largest study to date on this subject. The conclusions do not bode well for antidepressants, although they shouldn’t take them off the table as treatment options.

Before we get to the actual results, let’s deconstruct the study a little bit. The investigators took 326 elderly patients with dementia (mean age of 79 years; 68% women) from 9 centers providing old-age psychiatry services in England. All participants were diagnosed with comorbid depression for 4 or more weeks and had a score of 8 or more on the Cornell scale for depression in dementia (CSDD). For those who are unfamiliar with the CSDD, it includes both interviews with a caregiver and the patient on 5 domains: mood-related signs, behavioral disturbances, physical signs, cyclic functions (variations in mood & sleep changes), and ideational disturbances.

Participants in the study mostly had moderately severe Alzheimer’s disease with average mini-mental state examination (MMSE) scores of 18, and most were still living in the community (85%). The depression was significant in this population, with mean baseline CSDD scores of 18 and most (68%) having been diagnosed with depression for more than 6 months (a future argument against regression to the mean as we get into the results section).

Individuals were randomly assigned to receive target doses of 150 mg of sertraline (n = 107), 45 mg of mirtazapine (n = 108), or placebo (n = 111) daily. Results showed basically no difference in efficacy between antidepressants and placebo. The CSDD scores decreased for all groups from baseline to week 13 (3.9 for sertraline, 5.0 for mirtazapine, and 5.6 for placebo) with no significant differences between any groups. At 39 weeks, the results showed the same thing, with no real difference between the decreased CSDD scores in all of the groups (4.0 for sertraline, 4.0 for mirtazapine, and 4.8 for placebo). Furthermore, subgroup analysis examining outcomes by baseline depression severity also did not show any significant differences.

So, the main question after reading this aticle is should we continue to prescribe antidepressants in dementia? Well, maybe. I think the most interesting aspect of this trial is the improvement in CSDD scores in the placebo group despite the fact that most were dealing with depression for many months. It should be kept in mind that all of the groups were being cared for in a psychiatric service center in the UK. All we can really say is that antidepressants didn’t seem to add any additional benefit to this level of treatment for trial participants. What did this non-pharmacological treatment look like? I’m not sure after reading this article, but treatment in old-age psychiatric services in the UK is probably not the same as usual care as seen in primary care.

I would pretty much agree with Henry Brodaty in the accompanying editorial. He makes it clear that this study does not “advocate abandonment of antidepressants in people with Alzheimer’s disease and depression” and that “therapeutic trials for individual patients are warranted, although not as first-line treatment unless depression is severe.” The caveat to this though is that many of our older adults with dementia do not have access to the non-pharmacologic treatments for depression which may have resulted in the improvements across all groups.