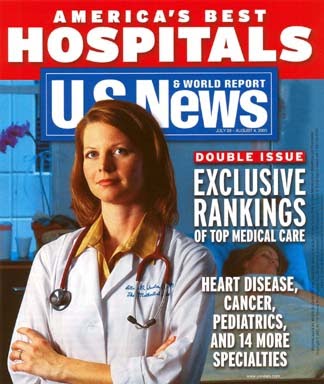 America’s leading teaching hospitals anxiously await the release of the annual US News hospital ratings. The “winning” hospitals will heavily market their rankings. However, there is now evidence these rankings are little more than a glorified popularity contest, and of little value as a measure of hospital quality. This critique of “America’s Best Hospitals” was published in astudyled by Dr. Ashwini Sehgalof Case Western Reserve University in the Annals of Internal Medicine.

It is suggested that the ranking are a complex amalgam of an evaluation of structure, process, and outcomes, based on “hard data.” The Sehgal expose shows that these claims, at least in terms of what influences the final rankings, are essentially rubbish. In contrast to how US News portrays their rankings, the rankings are determined almost entirely by a survey of hospital reputation. A read of the US News methodology would suggest a wide array of objective measures of quality determine these rankings. But the Sehgal report shows all these objective measures matter little, and the only factor that really matters much is the reputation survey.

According to the US News methodology report, the reputation survey accounts for only 32.5% of the total score, while objective measures of hospital quality account for 67.5% of the score. This is totally misleading in terms of how the rankings are operationalized. As Sehgal shows, because their is a huge degree of variability in the reputation survey, and comparably mimimal variability in the objective measures, the final ranking are dominated by the popularity contest.

Hopefully in 2010, US News will fairly portray America’s Best Hospitals as a ranking based almost entirely on reputation. To claim that these rankings are significantly influenced by objective measures of quality and “hard data” is misleading.

That at least gives users the option to decide for themselves how meaningful the reputation survey is to them. I suspect it is worth a little, but just a little. I am sure that there are many outstanding hospitals that are not as well known, and many hospitals not nearly as good as their reputation. And of course, the highly publicized US News rankings may self-perpetuate reputations.

The closing comment goes to Dr. Sehgal who noted in an interview:

“There is virtually no relationship between reputation and quality of care. If we used that approach for professional football we’d say, ‘Let’s just award the Superbowl to the Dallas Cowboys because they have the reputation of being America’s team.”